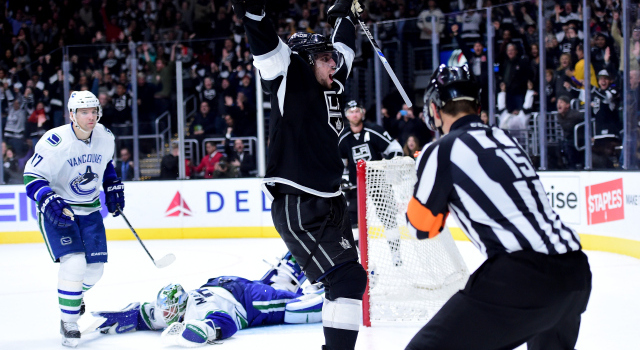 After having to endure 84 seconds of wasteful, wretched and tedious four-on-four overtime hockey following a Canucks penalty kill, Matt Bartkowski skated off-side at the Kings’ blue line to set up a three-on-three session between a team that entered the night 3-0 in games decided in overtime and a team that entered 0-6. 12 seconds later, after Vancouver won a faceoff and Alexander Edler passed the puck to no one in partic’lar, Jeff Carter and Anze Kopitar connected on a play that had a scant chance of being added to the police report of Jacob Markstrom robberies, thus sending the Staples Center crowd into OT delirium for the second consecutive game and fourth time at home this season.

The path getting to overtime wasn’t exactly unfamiliar to those who’ve in the past been wowed by an elite Los Angeles possession game but frustrated by a low shooting percentage. Jacob Markstrom was the visitors’ best player, having stoned Tyler Toffoli (twice) on Grade-A looks in the first period, thus allowing an in-real-life manifestation of Toffoli’s shooting percentage regressing towards the mean. (Guys, I hate to break it to you, but he wasn’t going to shoot 30% all season.) With an additional Grade-A stop on Anze Kopitar, who used a Vladimir Tarasenko-esque cut from the hash marks to the mid-slot before unleashing a sharp snapper, Markstrom denied a massive Kings push early, thus setting the stage for the Sedins to capitalize on the power play following an offensive zone penalty. There was little chance that Tuesday’s game would unfold the way the Canucks’ game against the Ducks did. Vancouver is a proud and well-led team and well-coached, and after following the team’s sentiments during their morning skate on Tuesday, it was clear that a marked improvement in their attitude and compete would be expected. That they were without Ben Hutton and Brandon Sutter on injured reserve, scratched Jake Virtanen, Chris Higgins and Christopher Tanev due to injuries sustained in Anaheim, played Alex Biega on a first pair and defenseman Andrey Pedan up front in his NHL debut sent off some alarm bells – for the home team. Combined with their listless performance the night before, Vancouver entered the game with a bit of a wounded snake-type feel. Even if the personnel says otherwise, Los Angeles was going to get a difficult game from an opponent determined to bring a much healthier effort. Those teams are dangerous to play.

Again, here’s a reminder that the Kings missed the playoffs last season because of a dreadful and unlucky record in overtimes, shootouts and one-goal games. More regression/progression: Los Angeles won 13 of 37 one-goal games last season and was 3-15 in games that extended past 60 minutes. This year, the Kings have won nine of 14 one-goal games and are 5-1 in games that extend into overtime. With 14 of the first 24 games this season being decided by one goal (58%), the Kings thus far have been playing a higher percentage of tight games than last season, when 37 of 82 games (45%) were decided by one goal. Remarkably, nine of the team’s last 10 games have been decided by one goal, and since their 0-3 start, the only loss by a margin of more than one goal was the defeat in Chicago on November 2, a game in which Los Angeles entered the third period with a lead. 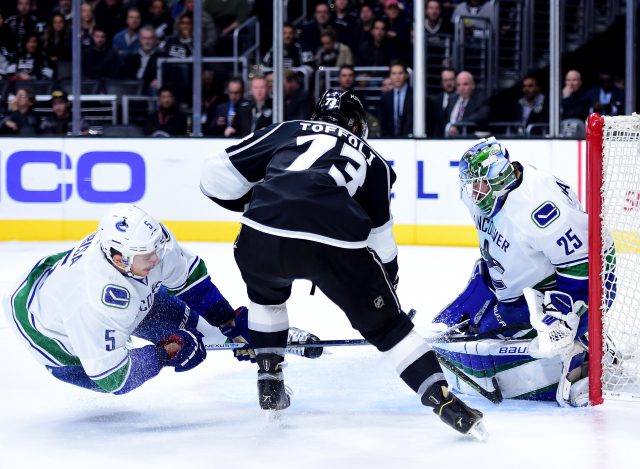