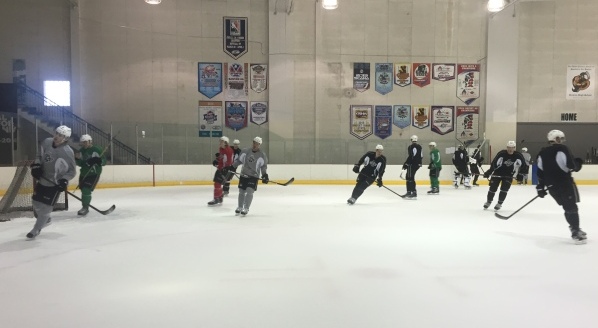 Some notes from today’s practice at Center Ice in Ontario.

–A finally-healthy Reign squad boasted five forward lines at practice. Center Kris Newbury (more on him next) is back from a broken foot, veteran winger Paul Bissonnette played last Saturday as he returned from a back injury and joining the team last week on a pro tryout agreement was forward Curt Gogol. “We’ve got a lot of bodies, I know, I don’t know what happened,” head coach Mike Stothers joked after practice. “We went from having one extra to now we’ve got a full house — five lines, seven D. It’s good. It means we’re healthy. We’re getting Newbs back, Biss most recently back and we picked up Gogol. So now we’ve got some depth, which is a good thing. The schedule being what it is, the month of December anyways pretty much just Saturday-Sunday (games). I’m hoping that we can stay healthy. But, if you’re staying healthy, it usually means you’re not playing hard enough. We want to be playing hard enough.”

–Newbury, who suffered a broken left foot on Oct. 23 against Bakersfield when he was hit by a shot, has been practicing fully this week and is expected to make his return for this weekend’s games in Charlotte, N.C., against the Checkers. “I haven’t even thought about when I’ve been out there,” Newbury said of the foot. “It’s felt great, ever since I started skating. I’ve had no setbacks, no swelling or anything. I kind of just take it day by day, make sure it’s feeling good and so far so good.” Newbury played the rest of the game he was injured in, and the day after, but Monday’s practice off the weekend was too much to bear. Once he knew he would be out for an extended time, he found a way to turn it into a positive, visiting his family for a week in Harrisburg, Penn., and watching his kids play hockey. For the Reign, his four-to-six weeks out prognosis was not good news. He was leading the team with three goals and three assists through five games and in his absence Adrian Kempe was moved off the wing into a less comfortable role as center. On Wednesday, Newbury, who has played 12 pro seasons split between the NHL and AHL, was back centering Kempe and Sean Backman. Stothers himself has been impressed with what the 5-foot-11, 213-pound, 33-year-old has brought to the table this week. “Actually he’s looked surprisingly good,” the coach said. “And I just mean for the length of time he’s been off, he’s been limited as to what he can do and he comes of the ice, even the first day he looked good. And then you’re like, ‘wow.’ There’s a lot of natural talent and ability but we’re looking forward to the fact that he’s good on faceoffs, our puck possession from the onset should be better.” Newbury, whose first full day of work was Monday, said his recovery has included a lot of stem treatment and balance work. Now, the Reign will be looking for him to provide some balance back in the lineup through the middle. “He’s a veteran presence. He’s a gritty guy. He plays hard,” Stothers said. “He’s the type of guy that the other team looks around for on the ice because you’re never quite sure where he is or what he’s gonna do. Little bit of a late bump, a slash to the back of your legs, he has a way of being a factor. He plays on the edge. Sometimes he’ll cross the line and take some penalties. You don’t want to curtail that edge that he plays with. He’s smart enough to know when to push the envelope and how far to push it and we’ll see how it goes.”

–Monarchs defenseman Alex Lintuniemi (upper-body injury) has been in Ontario this week to practice with the Reign as he rehabs. The Monarchs have been on a four-game road trip, so it gave the Kings’ 2nd-rounder from the 2014 draft a chance to keep skating. “It’s a good opportunity for him to see just what is expected and what is needed of him as far as on-ice, off-ice,” Stothers said. Lintuniemi sported a red no-contact jersey and is expected to head back to Manchester on Thursday. The 20-year-old Finland native has been limited to eight games with the Monarchs (no goals, five assists).