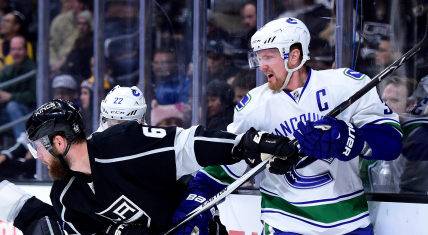 Canucks head coach Willie Desjardins, on third period:
We weren’t great in the third. I think they’re a good team, we knew they’d come hard. They got some power plays in third that makes a difference as well.

Desjardins, on whether it’s better to play for the shootout:
I think you’ve gotta play confident. You’ve gotta believe in what you’re doing and right now it’s hard to believe sometimes if you don’t get results. That’s a tough thing to do, but given that, we have to. We have to believe what we’re gonna do and we have to go out and execute it.

Desjardins, on the road trip and this game overall:
We’ve played lots of good teams on this trip. It’s been a tough trip and we played some pretty good hockey on this trip. … It’s a back-to-back and our guys played pretty hard. We had a real good second period. The guys played hard in that second. You’ve gotta give them credit for kinda bouncing back the way they did … coming back from the Anaheim game.

Jakob Markstrom, on this overtime loss and recent overtime losses:
It’s really tough. We were winning the game pretty much for almost 50 minutes. Them having a goal in the third and then in overtime … getting sick and tired losing in overtime. It’s no fun, especially every game except, well, [the] Anaheim game we right there. We can’t get too far behind. We’ve got to bear down and keep working and hopefully the win’s gonna come.

Markstrom, on his play overall tonight:
I like that I didn’t let more than two goals in but I would have liked it more if I only let one in.

Markstrom, on Doughty’s goal and if he was screened:
A little bit. It’s kind of a broken play from the corner and then it comes up to him and he got a decent, good shot.

Henrik Sedin, on the game overall:
We didn’t play our best game but at least we had the intensity.

Henrik, on the penalties in the third period:
We got into penalty trouble. They gained a lot of momentum and there were some calls that were so-so, but we can’t take those.

Henrik, on Markstrom:
He played great, really good. I thought we battled much better. When he needed to be there he was there.

Henrik, on the homestand coming up:
We’ve got to string a few wins together. It’s been way too many ‘win one, loss one’ or lose a few, especially in overtime where, if we have a better record there it looks better in the standings. We keep losing those ones and it wears on you when instead of walking from this game maybe winning in a shootout or in overtime, you lose and have to answer a lot of negative questions.

Daniel Sedin, on the California road trip:
We were all disappointed with last night’s effort (4-0 loss to Ducks) so we came back and battled hard tonight. It wasn’t pretty, but at least we battled and that’s a good start. We’re going to have to do that for each and every game for us to even have a chance to get into the playoffs.

Daniel, on overtime losses:
It feels like every loss we’ve been having the puck and give it away and then they score. … Right now we’re pushing to score and that’s no good.