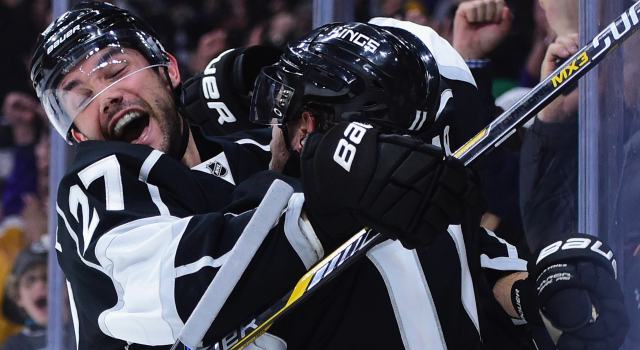 On whether the win was due to “more great coaching in overtime”:
It was a great play by the three guys on the ice, yeah.

On the Kings’ overtime play this season:
We’ve got extra points in overtime. They’re much needed.

On how strategy changes when switching from four-on-four to three-on-three:
I think as long as the players are aware of it and understand how the rule works now, so you know you’re four-on-three for 20-something seconds, and you then you you’re coming out as four-on-four. The strategy would be that we had three forwards and one defenseman on the ice, and we needed one of the forwards – and it was Jeff – to get off so we could get another defenseman out there.

On whether the third period push was due to the Kings’ efforts or the Canucks being tired:
I wasn’t in their dressing room before the game or after the game, so I don’t know if they were tired or not.

On coming from behind to win:
It probably happens more, but obviously we need to win. We’re trying hard and there was a lot of pushing being done by our bench. I didn’t think we had a very good first period. Trying to get guys up to speed and work with Vancouver.