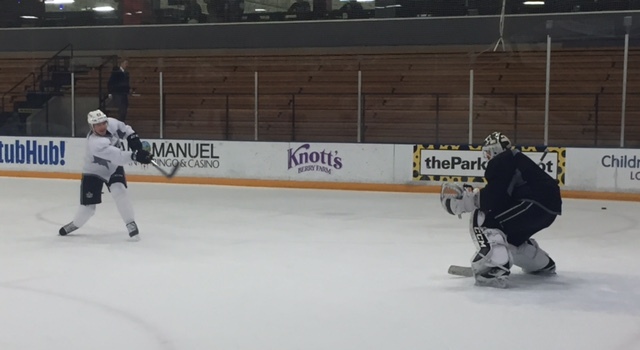 Good morning from El Segundo! The Kings began to trickle onto the ice before 9:50 a.m. and concluded the skate with a center ice stretch at 10:06 a.m., which represented one of the shorter morning skate in the history of morning skates. There was still enough time for line rushes, though!

-Derek Forbort and Jordan Weal skated as extras and remained on the ice for work with Jhonas Enroth, so they’re unlikely to return to the lineup. Jonathan Quick left the ice first, wrapping up a neat little bow on a morning skate that didn’t exactly provide a Keyser Söze-level of surprise.

-Several of us this morning spoke with Christian Ehrhoff, whose performance against Chicago punctuated an upward trend in his recent play. Expect a story later today on a player who has been trending well. “I have to make some adjustments from the way I played before to what is expected of me here,” he said. “I think it’s taken some time, but it’s getting to a point where it’s getting a lot better.” Also learned from the chat: Ehrhoff is a Borussia Dortmund fan.

-The morning skate ended so soon that it’s still a bit early to gather reports from Vancouver’s morning skate (not that an extensive one is expected after the Orcas were sighted in Anaheim last night). The word following the Canucks’ loss to the Ducks was that Jacob Markstrom would be the most likely to start against the Kings, and that Jake Virtanen, who took a big hit from Ryan Getzlaf, isn’t likely to play (though his ailment isn’t expected to be serious).

Pedan still with team. Get the sense Biega being called up as insurance. Hutton not quite ready to play. Tanev is questionable for tonight.

A preview of this week’s Black and White episode: