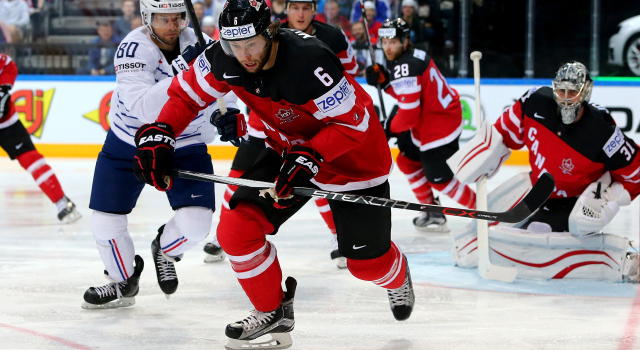 Several assorted notes and tidbits on a Monday afternoon:

-Matt Greene saw a doctor earlier today as the process of his attempt to return from an upper-body injury continued. It’s too early at this point to gauge exactly where Greene is at, but the veteran defenseman, who suffered an upper-body injury during a preseason game in Denver on September 27, appeared in the first three games of the season for Los Angeles, during which he suffered an injury deemed to be “the same area” as his preseason ailment. He hasn’t played since October 13 and was placed on injured reserve on October 23. As of last week, he hadn’t received the LTIR designation, which would provide the Kings additional financial flexibility.

While Greene took part in practices in a limited capacity before the team’s most recent road trip, he did not travel and instead skated on his own at Toyota Sports Center. Since the team’s return, he has not been an active participant in practices and though he took the ice well into practice on Friday, he didn’t skate with the team Monday morning.

-I’ve been told by multiple people that Jake Muzzin is drawing major interest from Hockey Canada in advance of the 2016 World Cup of Hockey. A Pierre LeBrun roster projection from the weekend included Muzzin, but not Brent Burns, Kris Letang or Brent Seabrook. Apart from a coveted and diverse, all-purpose skill set, one thing that Muzzin has in his favor is that he is a left-handed shooter on a team that simply doesn’t have as much room for righties, considering that Drew Doughty, Shea Weber, Alex Pietrangelo and P.K. Subban all shoot from the right side and are basically locks. I’m also hearing Marc Staal, a lefty, is being considered in more of a shutdown role, though the spot that Muzzin could step into would be similar to the spot held by Dan Hamhuis at the Sochi Games, and that Marc Giordano is also under consideration. For what it’s worth, Tyler Toffoli was also included in LeBrun’s most recent projection.

Names have been withheld to protect the innocent, but there are general managers and hockey operations executives of rival teams who have been extremely high on Muzzin’s play, which was illuminated during his Stanley Cup performance two springs ago and has shown signs of acceleration through the first 23 games this year. One member of the Kings’ hockey operations staff praised Muzzin for his developed ability to look off one teammate and make another play when his first read in distributing the puck isn’t available. There may be some executives of eastern clubs who aren’t as well versed in his play, but the 26-year-old defenseman will have ample opportunity to leave an impression during the club’s six-city Eastern road trip that opens next week in Columbus. Preliminary rosters for next year’s World Cup are due March 1, with full rosters due on June 1.

-As for the superstar on Los Angeles’ back end, there’s nothing firm or new to report on Drew Doughty, other than that the team has been bullish on his early season play and that they’ve been pleased by Doughty’s ability to raise his level of leadership after the topic had been preached to him throughout the off-season.

-Dwight King is still a little ways away from skating. Though he put his foot in a skate boot over the weekend, he’s still not expected to actually resume skating for roughly another two weeks, according to a second hockey operations source. Late last week, I had been told that it would be two to two-and-a-half weeks before he’d be close to a return.

-I’ve been told that Spencer Watson has taken 146 shots on goal through his first 26 games with the Kingston Frontenacs (individual shots on goal totals aren’t immediately available on the OHL’s site). That’s an impressive average of 5.6 shots per game. Watson, a 19-year-old taken in the seventh round of the 2014 NHL Draft, has 14 goals and 29 points for Kingston and has made a strong case for inclusion on Canada’s World Junior Championship roster following a three-goal, plus-two performance in the OHL’s two-game sweep of the Russians as part of the CHL Canada-Russia Series. Watson, a 5-foot-10, 170-pound sniper, last represented Canada when suiting up for Team Ontario at the 2013 World U-17 Hockey Challenge.