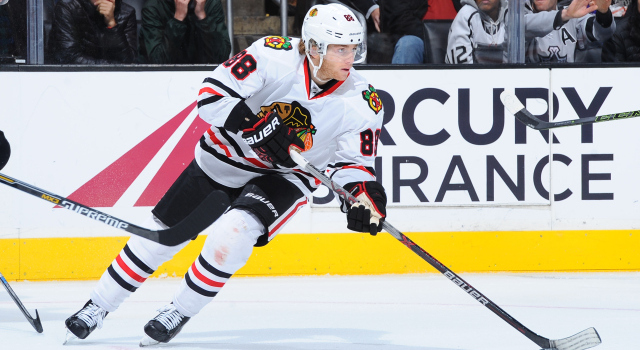 “The Hawks had been 42-0-0 when leading after two periods, dating all the way back to the start of the last season. The last team they coughed up such a lead and lost? Game 7 of the Western Conference final in 2014, against these same Kings.”

“Kane scored a power-play goal in the first period Saturday night in Los Angeles to extend his streak to 19 games — breaking the record for American-born players.”

“The Blackhawks didn’t end this trip exactly how they wanted. They got eight points out of a possible 12. But they were close to getting that ninth and finishing that much better. They just played too conservative with that lead which, against the Kings, hasn’t been safe in the past.”

“You’re careful not to heap too much criticism on Seabrook, whose turnover led to Marian Gaborik’s tying goal with less than six minutes remaining in regulation. Seabrook has been great throughout this season and was a huge reason why the Blackhawks won on Friday – he had a three-point night with two primary assists and a second one.”

“It seemed like Quenneville tried to spread Toews out between the Kopitar line and the Carter line. The problem with that is obvious: Toews can battle the best of centers to a standstill at worst but that means others have to pick up the scoring.”

“However, Toews has been strapped with Andrew Shaw and Ryan Garbutt ever since, essentially making him little more than a fourth-line center who plays a lot. He’s been unable to drive play the way he wants and what plays he does attempt to make, his teammates are incapable of finishing. It’s time to get Toews and Hossa back together and make the Hawks’ top line a real NHL top line again.”

“Kane now holds the longest point streak by an American-born player in NHL history, surpassing former Hawk and current TV commentator Eddie Olcyzk and Phil Kessel. It is the longest streak since the 2010-11 season, when Sidney Crosby reeled off a 25-game point streak.”