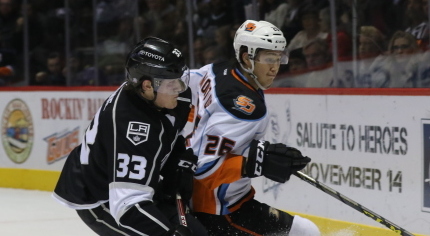 Reign game breakdown
The Reign (11-4-2-0) went 0-for-7 on the man advantage and were nearly shut out against the Gulls (11-7-0-1), losing 3-1 physical ride at Citizens Business Bank Arena on Saturday night. It was the second of a home-and-home after falling in San Diego on Friday by a 3-2 score. The Gulls scored shorthanded (a breakaway by Tim Jackman 4:55 into the first period) and on the power play (a Nick Kerdiles deflection in the first that put the Gulls up 2-0). The third meeting between the teams started off with a veteran bout between the Reign’s Paul Bissonnette and Gulls’ Brian McGrattan. In all, six fighting majors were called and 78 PIM.

Best quote
Reign head coach Mike Stothers, on what he was said to McGrattan after his fight with Bissonnette: “Just asked him how his family was. There’s nothing to it. I suppose he must have read the tweets I guess of my postgame comments (from Friday). I stand by what I said. He doesn’t like it, too bad.”

Three stars
–Ryan Faragher – In his first AHL start of the season, the Gulls goalie stopped 24 shots. He didn’t have to be brilliant, but he was still better than his counterpart Peter Budaj, who lost back-to-back regulation games for the first time this season in a 23-save effort.
–Adrian Kempe – His 7th goal of the season (he trails Michael Mersch’s 11 for the Reign lead) was the lone bright spot in an otherwise rough game offensively for Ontario. Kempe blasted a shot from the high slot with 7:08 remaining off a slick delayed curl pass from Sean Backman to help the Reign dodge what would have been their second shutout of the season.

–The rivalry – Although the Reign were contained for the majority of the game, there was plenty of entertaining hockey as the back-to-back provided a bit of carryover from a physicality standpoint. Even center Nic Dowd picked a fight with Kerdiles late in the third. Ontario’s fourth line of Ryan Horvat, Scott Sabourin and Bissonnette provided energy throughout that was entertaining for Stothers, who said, “they’re a little reckless, they bang around, it’s exciting.”

Turning point
–Two series of plays at the end of the second period did not bode well for a Reign comeback. First it was Antoine Laganiere’s backhander that beat Budaj with 4:25 left, giving the Gulls a 3-0 lead. Not only did it give San Diego a nice cushion, it was just the way it happened. A Gulls point shot deflected and went to Laganiere’s skates, resulting in Budaj being caught out of position when the center deked and shot. Then, with 3:12 left the Gulls’ Mike Sgarbossa went to the box for a slashing call and the Reign couldn’t muster any power play activity. It all brought a “maybe it’s just not their night” feeling.

Stat fact
–7 – Power play tries for the Reign. Seven times coming up empty and even a minus-1, giving up a Jackman’s shorthanded breakaway goal in the first period. It was the first shorthander the Reign have given up this season.

This and that off-ice
Citizens Business Bank Arena hosted Professional Arena Soccer League game for the Ontario Fury at 1:05 p.m., where they lost to the San Diego Sockers in a shootout. The soccer flooring was quickly turned over from 3:38 p.m. PT to 4:50 p.m. PT, according to Louis Brewster of the Inland Valley Daily Bulletin. The Reign and Gulls took warmups at 5:28 p.m. and the puck dropped shortly after 6.

Next up
The Reign will kick off their December schedule with a road trip to face the Charlotte Checkers next Saturday and Sunday.