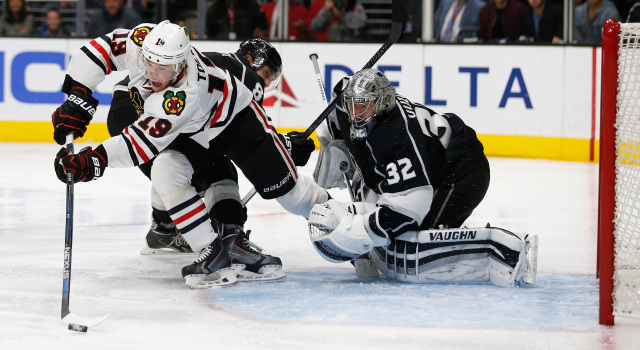 On whether it was “gratifying” to come back against the defending champions:
Obviously it’s gratifying, but I think that we played a pretty solid game, and we felt going into the third we were still in it. [Reporter: What was the difference in the third period?] Not too much. Carter scored early. I think we had a great second period, too.

On whether he thought the Kings always had a chance:
Teams are too close. Most games are one-goal games. Not much difference in any of the teams.

On Patrick Kane’s point streak:
You know what? I wouldn’t bet if 82 is the record for him. I wouldn’t say it’s the start to the season. Probably if he wouldn’t have gotten hurt in the previous season and he won the scoring championship, then look what he does in the playoffs. He’s a great player. Just happened to be in Los Angeles.

On the players’ reaction to the win:
I’m sure they’re tired. It’s not easy to play 65 minutes. I heard there was a little bit of trickle-down saying that these overtimes, these three-on-threes were getting boring. I guess that we didn’t watch our road trip, either, the Philadelphia game or the Tampa game, to see how many scoring chances there were. There could’ve been 15 goals scored in those 15 minutes that we’ve seen. Not quite 15 minutes, because what was it tonight? [Reporters: 2:04]. So we played five in Philly, which probably could’ve been seven goals, and five in Tampa, and it could’ve been four goals, and tonight there could’ve been how many? So you guys have got to think about something else to talk about than three-on-three.

On not giving up a third goal:
Well, Quickie made two or three breakaway saves, including the last few seconds that they could’ve won it. I’m not sure what Brownie was doing inside the far blue line there.