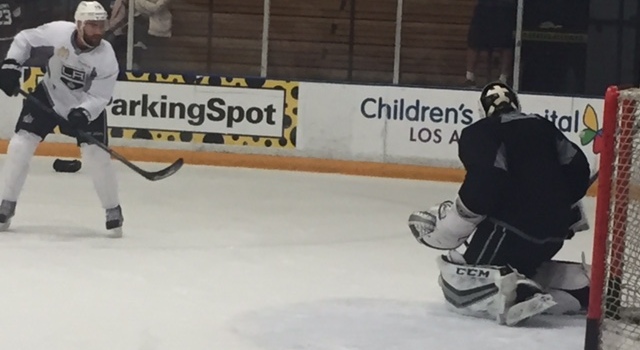 Good morning from Toyota Sports Center, where the Kings took part in a quick morning skate. The nuts and bolts: Both Darryl Sutter and Jeff Carter took the option, Jonathan Quick left the ice first, and Jordan Weal and Derek Forbort remained on the ice for extra work.

With that said, expect the Kings to line up as such:

-The Blackhawks’ morning skate at Staples Center was optional:

And we have an optional morning skate. So we'll know lines/D pairs in warmups tonight. #Blackhawks

Looks like it's an optional morning skate today. No Q, and 13 players so far. #Blackhawks

-I’ll have stories on how to contain Patrick Kane tonight (as if there’s any effective blueprint). Alec Martinez and Trevor Lewis shared some interesting takes on game-planning for a player who has points in a career-best 18 consecutive games. Kane is tied with Eddie Olczyk and Phil Kessel for the longest point streak by an American-born player.

-Eight different games extended past regulation yesterday, with three games being decided in a shootout. Now that the season is seven weeks old (and teams had an extra three weeks to prepare for three-on-three overtime in the preseason), the dynamic of New Overtime has shifted, and high quality chances have been reduced. I’ll have several interesting takes from John Stevens and Dustin Brown on the subject later today.

On whether Drew Doughty’s minutes will go back up against Chicago:
I’m not sure they can go up much more. Drew’s been really good. I think the big thing with Drew is shift length. You want to be able to move him around a little bit. Chicago does that a lot with their guys, and Drew’s done a really good job with that lately where his shift length’s come down a little bit. Even though his minutes are up, I don’t think they’re as taxing of minutes. If he hits six less shifts, if it helps his shift length by five seconds instead of six more shifts, it’s a big difference in the game. Drew’s always going to be a key player in a game like this. I think we’re going to expect those kind of minutes. I think he plays best when he’s somewhere in the mid-20’s, but with the way they have their lines spread out there, we expect him to be counted on like he usually is.

On the importance of secondary scoring:
Well, obviously it’s important. It’s helpful. We’re a team that prides ourselves on great defense and not giving up much, so that’s certainly what we focus on and how we’re built, but anytime you get some production of what you’d call secondary scoring, we went on the road there in Florida, and that was the one game probably all year where we got a goal from every line. I know the Shore goal was disallowed, but if you get a goal from every line, that’s something that’s really going to enhance your chances of winning when that situation occurs. [Reporter: Does that make it easier for the top producing line, that if they have an off-night that they know that someone’s picking them up that has their back?] Well, I think that’s how you win. I mean, some nights it’s going to be your defense that’s going to contribute. Some night your power play’s going to score a big goal. I think the one good thing about our team is that we don’t sit around and wait for our power play, because some games we won’t get any, like the other night. You’ve got to be able to win in different ways. That’s why we pride ourselves on defense. But some nights it’s going to be your defense, some nights the Carter line’s going to have a big night, sometimes you’re going to chip in and get a little contribution from everybody. I think that’s why it’s important to play good, solid defense. Over the course of time you’re going to need help from all corners of your offense.