How to gameplan for a red hot Patrick Kane? 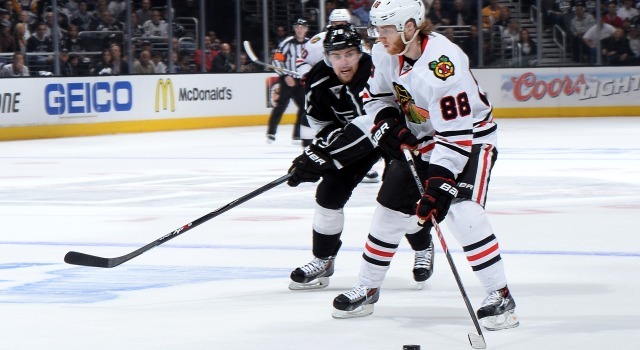 It’s not hard to find Patrick Kane on the NHL’s stats site. Look up.

Clearly, he’s the frontrunner amongst frontrunners through 23 games for the Hart Trophy.

“They’ve got a group of guys there who are used to winning, but Pat Kane’s having a career year,” Associate Head Coach John Stevens said.

Sustaining his career-year has been his regularity. With points in a career-best 18 consecutive games, Kane has tied Eddie Olczyk and Phil Kessel for the longest point streak by an American-born player and is three games away from tying Bobby Hull’s franchise-record 21-game point streak, set during the 1971-72 season. It was the seventh game of the streak in which he danced through the neutral zone before unleashing a crisp wristshot from between Alec Martinez’s legs that deflected off the inside of the defender’s knee and snuck up underneath the crossbar to tie the game at two. His no-look, backhanded pass from behind the net to Teuvo Teravainen later in the period served as the game-winning assist.

“When he has that time and space, I think he can make plays as good as anyone and I think he did that against us last game,” Trevor Lewis said. “We just have to make sure we’re playing hard on him and take him out of it.”

‘Time and space.’ ‘Playing hard.’ Such are efforts that are applicable to virtually any skilled NHL player. But what is it that makes Kane’s skill and his efforts so unique, and what poses the biggest challenge in tonight’s game?

“The guys in D-zone, you have to stay cognizant of where he is. He likes to find that open space, kind of get lost a little bit and open up for a play,” Alec Martinez said. “The guys who play with him, they do a pretty good job of finding him. He’s just good at finding that soft spot and getting a shot on net. I guess in the neutral zone, he likes to curl back a lot and come with speed. So as a D-man, you’ve got to be aware of that and constantly gap up and gap and re-gap just so you can take away a little bit of his time and space coming in. He’s obviously a really good player, a really good skilled player and you’ve got to be aware of him when he’s on the ice.”

John Stevens, on whether the Kings focus on Patrick Kane, or a skilled and tested Blackhawks team as a whole:
Well, I think you focus on Chicago, but you have to focus on him and what he’s capable of. If you look at the game last night, five veteran guys kind of took the game over and really got the team back in the game, won the game. They’ve got a group of guys there who are used to winning, but Pat Kane’s having a career year. He’s a danger all the time, and he’s got a little chemistry with the Panarin kid there, but they’ve got Hossa and they’ve got Toews and they’ve got Kane. They’ve got him spread a little bit. They’re a good hockey team. We’re going to have to play a good, solid 60-minute game, but for sure, we’re going to have to be aware of when Kane’s on the ice.

Stevens, on whether anything has changed with Kane’s game this season:
…He’s the same guy. He’s probably the best player in the league at utilizing the top half of the zone offensively. He’s as good of an open-ice player as there is in the league, and I think the addition of Panarin has been really beneficial to him, because they do seem to have chemistry and they read off each other and they’re both high puck possession guys, and they’ve got a big guy in Anisimov that goes to the net for them. I think probably the makeup of the line has been really productive for them.

Alec Martinez, on whether game plans account for individuals or the opposition as a whole:
I think it’s a little bit of both. We’ve got guys in here that have played plenty against the Chicago Blackhawks. We know them pretty well. We’ve obviously played against each other quite a bit the past few years. I think a lot of it is just reinforcing knowing what they do and then reinforcing our own game. I guess it would maybe change opponent-[to]-opponent because the Chicago Blackhawks versus a team in the east you really don’t see nearly as much. For them, I think we’re two teams that are pretty familiar with each other.

Martinez, on what went well for the first two periods in the last game against Chicago:
It seems like forever ago, but that’s a really tough building to play in. I think we got off to a good start. We’ve just got to focus on getting pucks in behind their D and get in on the forecheck and playing our game. I think obviously you have to respect the Chicago Blackhawks and they’re a really good hockey club, but I think it’s also important that you’ve got to take a focus on your own game as well. There’s a fine line between really worrying about what they’re doing and worrying about what you’re doing as a team. I think it would be imperative for us to really take a focus on our game and make sure that we keep doing the things that we’ve been doing well and sharpen up some of the things that we haven’t.

Trevor Lewis, on whether game plans account for individuals or the opposition as a whole:
There are definitely some players that you have to know when you’re on the ice against them. But I think for the most part we need to focus on playing our game. I think it’s good to see what they like to do, but I think our biggest thing is just focusing on what we need to do.