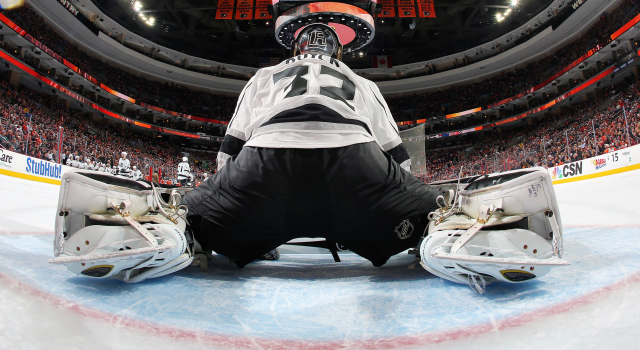 Through three overtime sessions, both the Los Angeles Kings and their opponents have registered 12 shots on goal. There’s not really much of a consensus yet on which teams have been the best three-on-three teams, but the Kings are 2-0 in games decided in overtime this season, and while their wins over Minnesota and Nashville saw both sides register quality scoring opportunities, Los Angeles had the edge in scoring chances on Wednesday night at Tampa Bay. (The Lightning won, 2-1, in a shootout.)

But one of the most interesting plays of the Kings-Bolts game occurred when Jonathan Quick had an opportunity to cover a puck, which would have drawn a defensive zone faceoff. Instead, he saw Anze Kopitar streak into the neutral zone in an attempt to generate a quick outnumbered counterattack. Quick offered a hard saucer pass up-ice to spring Kopitar loose for a breakaway, but Ben Bishop’s timely stick check kept the L.A. star from stickhandling around him and ending the game in overtime.

On Friday afternoon, Quick spoke about what he saw from the play, as well as how his duties evolve during the extra session.

Jonathan Quick, on how he read the play in overtime:
I think when the puck got shot towards me, I had seen ahead that Kopi already kind of blew the zone. It was a smart play by him, because he knew two things were going to happen – either I was going to freeze it and he would go to the bench, or I’d see it and try to get it up to him. It was a good play by him. Luckily I saw it and tried to get it up to him there.

Quick, on whether three-on-three overtime adds an offensive variable for goalies:
Absolutely. Well, I think the biggest thing is you want the possession, so if you’re freezing the puck, obviously that’s going to be a 50-50 play for the next possession. So if you have the ability to kind of keep the play moving – they probably won’t forecheck too hard because it’s only three guys – so if you have room to try to keep the possession, keep the play going and get it in the hands of one of your teammates, then you want to opt for that.

Quick, on the Kings’ early success in overtime:
We’ve got talented players. If you give guys enough room, they’re going to create some chances for themselves. Obviously, that’s huge. Like I said earlier, that possession thing, if you create possession, you have more time, you have the puck on your stick more often, and chances are you’ll have one or two more chances in overtime.