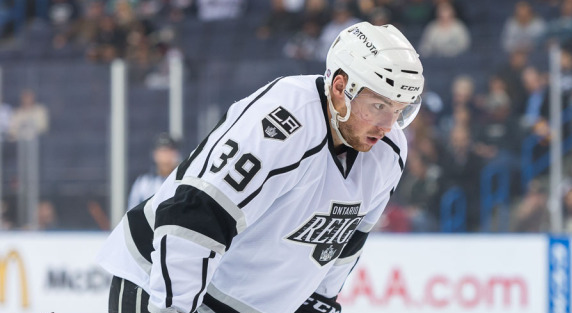 Head coach Mike Stothers, on the Reign taking penalties:
I was pretty happy, we got it down from seven to five. So, obviously they’re starting to listen. I don’t know what to tell you, we take penalties. I don’t know, maybe the refs don’t like us. We seem like a friendly enough bunch but for whatever reason we end up in the penalty box. But as I said, we did get it down to five and from there we’ll get it down to four and then maybe even three.

Stothers, on having a low-scoring game:
I thought it was a good game. The 7-6 (win last weekend against Texas) is very entertaining for the fans and I thought tonight was probably pretty exciting for the fans even though it was low-scoring because there was chances at both ends. It was a pretty exciting hockey game, I thought both teams worked hard. If you ask me as a coach, prefer the 2-1 games than the 7-6 games, so long as we have the two (points).

Stothers, on closing out the game:
The guys, you don’t really have to say too much to them, they can figure it out that it’s a tough game and that their opponent is playing extremely hard. There’s a time to go and there’s a time to make the smart play, whether it’s advance the puck or make sure you’re getting it out of your zone and into their zone. I think we did a good job of that. I think Buds was real good when he needed to be. I like the way we play. Missing Cres was a big loss in our lineup. We’ve had to adjust a long time here without Newbs and now you take Cres out, that makes a big difference down the middle. You really don’t realize how much of a difference it makes. He’s a penalty-killer, he’s a faceoff guy, the lines change, so I was real happy with the way the guys responded. And you know what, some guys played a little bit more in different situations and I thought they did a good job.

Stothers, on if Crescenzi being out resulted in line changes in third:
Nope. Sometimes you just have a feeling. I like the way Brodzinski plays. I want this guy to score in the worst way. He hit a couple of posts again tonight. I think once Brodz gets his first goal he’s gonna get a ton of goals. And you know what, Zykov was there with Mersch and Dowder and then you just get a gut feeling and put them together in the second and I like the shift that they had when Brodz was there and it’s kind of a luxury to be able to switch those two off. Nothing really changes for Dowder and Merschy, they just know they’ve got a young guy on the right side and both of them are learning as they go. So I think it’s good. Sometimes you’ve got to change just because of the penalties, whether you’re on a power play or a penalty kill. I wouldn’t read too much into it, again I was very happy with everybody. It’s not like I was dissatisfied with anyone and I was making changes just because of that.

Stothers, on goalie interference call on Backman:
I’m not sure what you’re supposed to on that situation. We’ve been called for that goaltender interference I don’t know how many times this year for guys just driving the net. Everybody complains in the game of hockey that you can’t score. So now we’re going to tell our guys that you can’t drive the net? So how do you think you’re gonna score a goal? You know what, they go to the net, they’re going hard, their defenseman pushes him into the goalie and it’s a penalty. Every single time you touch a goalie it’s a penalty, except when they touch our goalie and then it’s never a penalty. Have we had one go the other way? (Silence) OK, your silence answers the question right there. So, I am not, ever, going to tell our guys to stop driving the net. If you want to score goals you’ve got to drive the net. So if we run into a goalie, we bump a goalie, we get pushed into a goalie, sooner or later the league’s got to figure it out, or somebody’s got to figure it out and say ‘you know what, there’s something wrong here.’ It’s not like we’re clearly running into the goalie to injure him, you’re going to the net to make a play. So that needs to be addressed or that needs to be adjusted. Obviously it’s not going to be done tonight, obviously it’s not going to be don’t tomorrow because it’s Thanksgiving. You know what, and, nobody’s going to listen to me anyway. They’re just going to say ‘that’s just Stutts just rambling and ranting and raving and everything else.’ Anyway, that was my little second of venting. On that note, Happy Thanksgiving.

Stothers, on Ebert and activating defenseman:
We’ve actually been spending a lot of time with our defense and encouraging them to get up in the play. We feel that we’ve got a lot of defensemen that can skate real well and get up into the play. There’s a time to do it and a time not to do it but we really don’t want to harness our D. We want to encourage them, first and foremost, we get the puck in the transition, we want to move it up to our forwards right away. But we want to get our defensemen joining in. We want a four-man attack, so I think the things we have to be guarded about is sometimes our defensemen get so excited that we’ve got both of them going and that’s a bit of a problem. But yea, that’s what the game’s all about. You see it in the NHL, the Karlssons of the game, they’re always up in the attack. Ebs is a good skater, we know that if he does get up and something goes awry that he’s a strong enough skater to get back in position, Vinny’s the same way, Rainer’s the same way, and I know I’m going to leave somebody out (Reporter: Leslie). Les loves to go. I think there was a couple games ago I even showed a clip where we had Schultzy going up there. It was nice to see. Get the long limbs going and join the rush. We encourage that. We want that. That’s part of it. I guess so long as he doesn’t go into the goaltender’s area and takes an interference penalty, goaltender interference. Other than that, yeah.

Adrian Kempe, on his goal:
I think it was a tough power play to start there but then we got in the zone and Les got the puck in the slot and found me there in a good spot and I just tried to hit the net on the far side and it went post in. It was nice to have a power play goal again today.

Kempe, on the overall game:
It was a tough game. They had some really good chances on us in the third period and we had a couple of good chances too. It was a really tough game and we should have scored some more goals … probably them too, but we’ve got to be better in our own zone … we’re happy about the two points we got.

Kempe, on his shot and what he’s working on:
You always want to get as quick release as possible so that’s what I’m trying to practice on every day. Not always shoot as hard as you can, you’ve got to be aiming more and I think today I didn’t shoot the hardest shot just tried to aim at the far side and sometimes that’s the better thing. I try to work on my shot every day.

Justin Auger, on his goal:
I was just kind of in front of the net there and it kind of went right on my stick. It’s hard to miss those with the wide open net I just swung at it and luckily it went in. (Reporter: Did it bounce off your body at all?) I don’t think so. I just saw it come off the goalie and I turned around it was sitting right there and I swung at it. It seemed like it was going in slow motion I was just hoping no one would come in there and whack it away. It felt like couple minutes it took to get in there but luckily it trickled in.

Auger, on getting an early goal to get the fans into it:
It’s always good to get the goal right away there. It got the crowd into it, gets us into it going up 1-0 right away. It’s definitely the way you want to start a game.

Auger, on the rest of the game:
It was a good game. A lot of credit to them. They played a hard game, we played a hard game. Just got to 2-1 there and we’ve had trouble closing games off. Against Texas there they were scoring on us and we couldn’t shut them down so I think it was a big game for us in that way where we proved it to ourselves that we can close a team off in a 2-1 game and they don’t always have to be 7-6 and high-scoring affairs. It’s a 2-1 game, we can play those too. It’s a big part of it. You’ve got to be able to play those 2-1 games when both goalies are playing well and there’s not a lot of scoring you really have to look to your defense and be able to close a game like that out.

Sean Backman, on the goalie interference call:
I don’t know. That’s a tough call. I got a pass from Kempe there and I’m worried about getting to the net and trying to score a goal. I thought I did a decent job of trying to stay out of his way and get the puck toward the net. I got a little bump from behind on there with their defender. The rule is what it is, if you bump the goalie you’re going to get a penalty. … I did the best I could to stay out of his way but he’s got to call that I guess.

Backman, on being in box during the kill:
It’s not fun. It’s a 2-1 game and your teammates are killing one off that you took so it’s not a fun situation but that’s why it’s a team sport. I take a penalty and they kill it off and go back to work.

Backman, on the low-scoring win:
There were certainly less mistakes by us tonight. You can’t let up six goals and expect to win every time. To limit those mistakes that we were making on let’s say Saturday night, to win those close games is important for us.