Streak of Lightning familiar to Kings 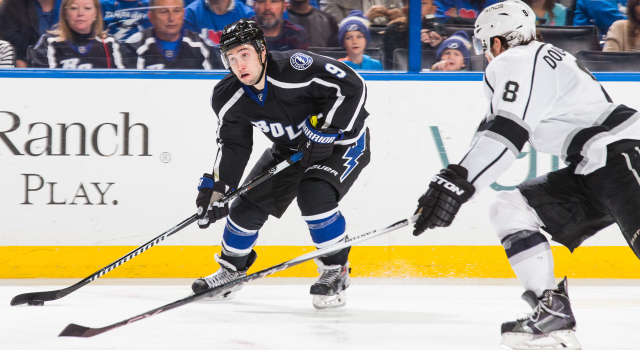 The Tampa Bay Lightning didn’t add to their Stanley Cup banner collection last season, though they did claim an Eastern Conference Championship and played into June. The club, which has rebounded recently by winning consecutive games against the Rangers and Ducks, is looking to solidify its footing in the Atlantic Division in advance of the returns of forwards Tyler Johnson (who may play tonight), Ondrej Palat, Jonathan Drouin and Cedric Paquette.

The Bolts are 10-9-3 through 22 games in a season in which many picked them to at the very least replicate last year’s Cup near-miss, and like the Kings, have experienced many of the same challenges experienced by teams that regularly play deep into the spring.

“Really good teams play in June,” Darryl Sutter said on Tuesday. “That it carries over to the next year does not mean that they’re still not a really good team.”

Sutter also noted that injuries and training provide the biggest challenges for teams that have such truncated off-seasons. Several of his players also weighed in on the challenges associated with a problem that any team in the league would love to experience: playing deep into the playoffs.

Dustin Brown, on how hard it is to regroup after going so deep in the playoffs:
I mean it’s definitely hard, mentally and physically. You do what you can in those couple of months, but it’s probably more challenging, from a mental standpoint, as a player you just keep telling yourself keep going, keep going, keep going. Part of being a successful team is you have to learn how to play the year after and it’s not an easy thing to do, but that’s when you try to lean on each other during tough times.

Brown, on what he learned the first year back after the 2012 Cup:
I think it just prepares you for what’s to come, obviously we didn’t make the playoffs last year, so it was a challenging year from a lot of perspectives, but I think we were better prepared for it the second time, just because we knew – plus the first time we did it, the lockout happened, guys had a lot more time, it was a different animal the first time around. So it was two different things for us, but the turnaround, that first year, you’re trying to get into the gym, trying to get on the ice, trying to get ready for September 15th, you don’t know if the lockout was going to happen or not. Then you go into limbo, and that was probably more difficult than the turnaround, not knowing.

Milan Lucic, on the challenges of regrouping after a Stanley Cup Final loss:
It’s hard, especially because you know how hard it is to get there, and you might never get a chance to get to the Final ever again. So, like I just said, again, you’re up 2-1 with just over a minute left, and all of a sudden 17 seconds to score two quick goals, and next thing you know they’re raising the Cup in Boston. To be honest, it’s something that you never really get over, there are times where you still get down thinking about it and you don’t really get over it, but at the end of the day, you know how hard it is and you know how good you have to be and how much luck you have to have and how fun it is, and as much pain as you felt losing that, it was still a lot of fun playing that kind of hockey for two months even though you don’t get rewarded with the Stanley Cup, so I think having that hunger to get back there, and using that as motivation, and kind of turning that into a positive is something that I try to take from it.