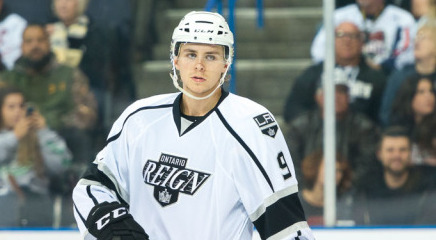 Reign game breakdown
Justin Auger scored 54 seconds in and Adrian Kempe scored the eventual game-winner on the power play as the Reign (11-2-2-0) won their third straight game, 2-1 over the visiting Stockton Heat (5-6-0-2). All three goals in the game were scored in the first period, with the Heat netting a power play goal by Bill Arnold on their first shot on goal. Reign goalie Peter Budaj picked up his 10th win of the season, stopping 18 shots.

Best quote
“Every single time you touch a goalie it’s a penalty. Except when they touch our goalie and then it’s never a penalty,” Reign head coach Mike Stothers on Sean Backman’s late penalty for goaltender interference.

Three stars
–Justin Auger – The 6-foot-7 winger got the Reign the all-important first goal off a rebound just 54 seconds in for his third on the year. It came off a shot from defenseman Nick Ebert, but Auger used his big frame to get positioning in front to bury it past Heat goalie Kent Simpson. Late in the third Auger also had a diving play to get the puck out of the zone with Simpson pulled.
–Adrian Kempe – The center showed off his scoring abilities, burying a shot from the right circle where he had plenty of time to pick his spot at 16:24 of the first period. The power play goal that stood as the game-winner was the first-rounder’s sixth of the season. He stands second behind Michael Mersch, who has the team least with nine.
–Reign special teams – Ontario finished 4-for-5 on the kill and 1-for-3 on the power play, both being big difference-makers in the final score. The final kill on Backman’s penalty and the ensuing 6-on-5 with Simpson pulled secured the Reign’s 11th victory.

Turning point
–With 6:30 left in the third period and the game still completely up for grabs, Backman took a goaltender interference penalty that set the table for a dominating Reign kill. From there, the Reign rode out the rest of the time remaining to ice this one for their second straight win over Stockton.

Stat fact
–2 – Posts hit by winger Jonny Brodzinski, one in the first and another in the third. The snakebitten rookie out of St. Cloud State is scoreless on the year.

This and that off-ice
Members from the Kings staff made the long haul in Thanksgiving traffic from Los Angeles to take in the game. Ran into Development Consultant Glen Murray and Manager of Hockey Development and Alumni Relations Sean O’Donnell between the first and second periods, who said VP of Hockey Operations and Director of Player Personnel Michael Futa, VP and Reign GM Rob Blake and Goaltending Development Coach Dusty Imoo were also in attendance.

Next up
The Reign will play a home-and-home with the Gulls (the Ducks’ affiliate) starting with a Friday road game at 7 p.m., their first of the season in San Diego.