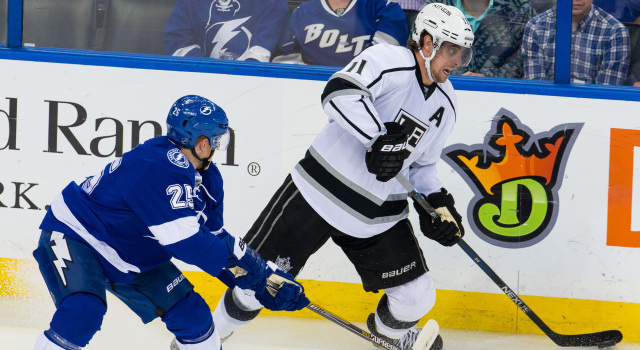 Nick Shore, on the game:
Well, that’s a good team and I think Quickie did a great job the whole game. He definitely bailed us a couple times. It was definitely good to come back there and get that goal, but unfortunately it’s one short.

Shore, on whether he was satisfied with the team posting 38 shots on goal:
Yeah, that’s definitely an effort from everybody. We’ve got to get shots to the net and a couple of those chances we just need to capitalize on.

Shore, on what they did to take away some of Tampa Bay’s speed:
They definitely have some guys that you have to be aware of, where they are on the ice and stuff like that. If we take care of our own end, coming out clean and stuff like that, then it makes it a lot easier on us.

Lucic, on what he liked about the team’s effort:
I thought we competed harder from start to finish. Everyone definitely showed up and played hard for us tonight, from the goalie, to the D, to all four lines. That’s just one of those things, it’s great that everyone is showing up and the effort is there and all that type of stuff. But we need to start getting rewarded for that. We need to start executing and finishing off our chances, because we had more than plenty tonight. To come out with one goal with the amount of chances and opportunities we were able to create, it’s something that everyone has to look at themselves and say ‘In this league, in order to win games, everyone needs to contribute.’ It’s good that we were able to get that point here tonight. But if you look at it as a whole, it’s a .500 road trip and you don’t make the playoffs by being a .500 hockey team. A lot of positives tonight, but also a lot of things where we need to get better at. And like I said, it’s finishing off those plays, and if we can do that, we’ll start scoring more than one, two, three goals. Usually the magic number is three, so we need everyone to step up and contribute the way they can.

Lucic, on whether Ben Bishop’s play prevented some scoring opportunities:
Yeah, you’ve got to give him credit, too. He played really well – a big body, stood his ground, didn’t give shooters a lot of net to shoot at, made some good post-to-post saves. That’s why he’s one of the premier goalies in the league. Again, we did a good job creating opportunities and that kind of stuff. But no matter how the good the goalie is playing, you’ve got to find a way to get a few past him. Unfortunately, he got the better of us tonight.

Lucic, on facing Tampa Bay in three-on-three overtime:
They’re good. They’re really good. You saw the speed and the skill and the opportunities they were able to create. When you look at the teams around the league, they’re definitely one of them that thrives off of playing three-on-three. But then again, we definitely had our chances as well. [Reporter: Quickie’s stickhandling there.] Yeah, a great pass up to Kopi and just misses the net. A great move and just doesn’t put it in but one of those nights where it’s not going in for us. But like I said, everyone showed up. Everyone brought the right type of effort, the right type of game and played well within the game plan. We’re going to need more of that with a couple of tough teams coming up on the short three or four game homestand before we hit the road again.

Anze Kopitar, on his breakaway opportunity in overtime:
I saw the puck going towards our net and then obviously I trust Quickie or trust his judgement where if he’s there he’s going to make it, or if not, he covers it and nothing happens. As soon as he grabbed the stick the way he usually does when he plays the puck, I was like ‘OK, this is happening.’ I went in. I made the move I wanted to and I think he just got a piece of it with his stick and unfortunately it went wide, unfortunately.

Kopitar, on whether the close game was representative of the whole trip:
I think so. Obviously, we didn’t get as many points as we wanted, but I think tonight was a character game for us. We easily could’ve packed it in after that goal we gave up, but battled back. At the end of the day, I think that the point is going to be pretty big and we’re coming home with five out of 10, which is not all that bad, but not as good as we wanted.

Kopitar, on Drew Doughty’s performance:
Drew was good. He logged a lot of minutes. Obviously he played really well, joined the rush, had a couple chances, too. We’ve just to do it a little bit more often.