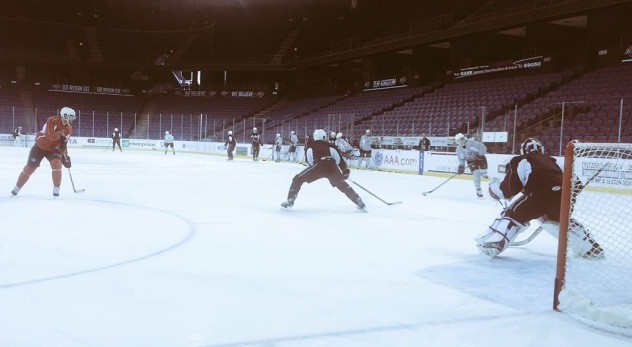 Some notes from the morning skate at Citizens Business Bank Arena (happy to not be in the frozen tundra rink that is Center Ice). The Reign (10-2-2-0) host the Stockton Heat (5-5-0-2) tonight at 7 p.m.

–Andrew Crescenzi was not on the ice and following practice head coach Mike Stothers said the center had to go home to attend a funeral. He’s expected to be back before Friday’s game at San Diego. It will be the first game Crescenzi has missed this season. Forward Derek Arnold was called up on Tuesday as a result.

–Peter Budaj was first off the ice and will make his 12th start of the season. The last time the Reign faced the Heat the netminder had a breakout 38-save performance in a 4-0 shutout. “We relied too much on Buds the last time we played this team,” Stothers said. “Stockton played us extremely well in Stockton. I think they had 38 shots, that’s not something we take lightly. We know we need to shore it up. He was good. He was real solid and he has been all year for us.”

–Veteran winger Paul Bissonnette (back) was skating in a red no contact jersey. Stothers joked that he looked good, “Biss-like,” earlier this week and that he “has to be close.” Bissonnette is expected to be a game-time decision. Bissonnette said he’s been “a bit of a mess,” and needed some maintenance but is trying to stay positive during one of the more frustrating times of his career. Bissonnette had hernia surgery in the offseason and then missed more games at the start of this season due to a groin injury: “I think it’s catching up to me the fact that I didn’t get to train and balance out the body and activate all those muscles. Now they’re probably just kind of like ‘whoa, getting overworked here.’”

–Center Kris Newbury (foot) watched most of practice from the bench and said afterward that he’s feeling good. He’s out of the walking boot and could start skating by the end of next week, according to Stothers. Newbury suffered a fractured foot on Oct. 23 against Bakersfield and was projected to miss 4-6 weeks.

–As far as Thanksgiving goes, team captain Vincent LoVerde said fellow defenseman Jeff Schultz is taking the lead and having a few people over. The Reign will skate tomorrow morning and then the players will have time with their families and each other. “We’ve already had our Thanksgiving, us Canadians, but I don’t mind double-dipping on the Thanksgiving,” Stothers said.