Having avoided a skid, Kings could make something of trip 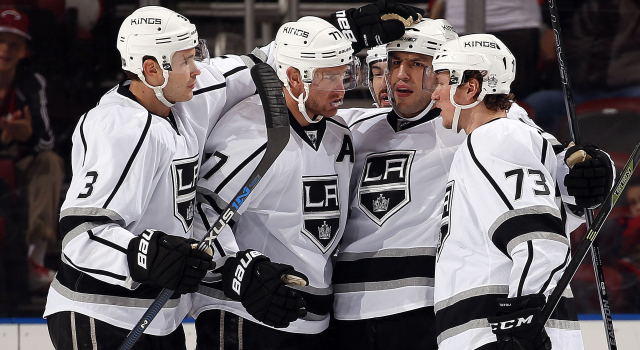 It’s not exactly a June, 2014-level of resilience, but the Los Angeles Kings showed good character in rebounding from a pair of defeats by posting their finest 20-minute effort of the road trip in the first period against Florida on Monday as they outshot the Panthers 18-4 and would have led by multiple goals if not for a controversial goaltender interference judgement call.

“From a pure hockey standpoint, it was about getting off to a good start. We haven’t started well, and it’s cost us games,” Dustin Brown said. “Ultimately when you’re losing games by one goal and you don’t start well, that’s where it begins, and I think a big group of us have been here in this situation last year, where one game turned into two, turned into four and so on, and then we had a six or seven game losing streak last year, and when you miss the playoffs by two points, it’s important to not let it slide, and when it does start to, you catch it as quick as you can.”

That’s exactly what Los Angeles did the last time they visited Tampa Bay. Having surrendered a third period lead and losing at Florida last February, the Kings entered Amalie Arena having lost 10 of their previous 12 games and emerged with a 4-2 road win against the eventual Eastern Conference Champions that served as the first in an eight-part string of victories.

As Brown verbalized, the leadership group met to ensure that a one or two-game swing didn’t evolve into anything that could’ve weighted the club down in the standings by costing valuable points.

“Yeah we talked about that,” Marian Gaborik said. “We can’t lose two in a row and then come into a third game, so we talked about urgency and having a good start, which we did. That was important, we carried on through the whole 60 minutes, and that’s what we have to do tonight.”

Those types of meetings happen so many times every season, but with an experienced and accomplished group that has flexed its muscles of governance within the room, the Kings are hoping that not only will they have staved off what could have been a losing streak, but that they’ve given themselves the best chance to end the trip with a winning record.

“On this road trip, Florida was the only time that we scored the first goal of the game, so we put a lot of emphasis on that,” Lucic said. “Especially here, ending off a road trip with a chance to go home with a successful road trip, so there’s a lot of motivation heading into today’s game, and we still have to keep proving ourselves night-in and night-out, and that’s another thing that we have to do tonight.”

Milan Lucic, on the Tampa Bay Lightning:
A lot of speed, a lot of skill, a lot of guys that can make plays. Obviously they have one of the best goal scorers in Stamkos, he does a really good job of doing his job, but it’s a great supporting cast there as well, and I think sometimes it gets overlooked. You don’t get to the Cup Finals for no reason, and like I said, they’re a team that can make plays and they have a lot of guys that can make big plays, so we need to be on top of our game defensively and make sure that we’re controlling the pace and the speed of the game, and if we do that, we give ourselves a chance to win.

Marian Gaborik, on whether he feels he has rekindled his chemistry with Anze Kopitar:
We played a good game so we just have to build on it, that’s the bottom line, and just play on both ends of the ice and create some chances.