Waking up with the Kings: November 24 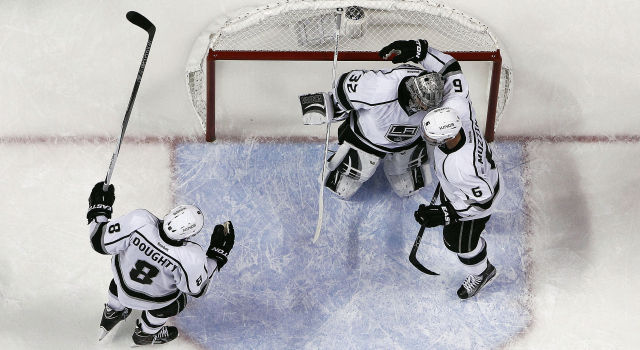 I’ll share something that’s mostly anecdotal, and I don’t really like providing these “mood of the team”-type observations, because as much time as I do spend around the team, I’m not present in meetings, or in the room before games, or on the players’ bus, or at player dinners or events. We’re able to catch a sliver of the feeling of the team when the room is opened to the media – it was last year when we were in Tampa that Dean Lombardi spoke about measuring neutrinos to quantify the feeling of “the room” – and it was through media availability over the previous three days that I got the sense that the Kings, starting with a slightly longer practice on Saturday in Raleigh, were a bit fatigued. This happens on the road, and it happens to all 30 NHL teams. Never mind the ease and comfort with which we travel – changing time zones and hopping to city to city for a week takes a lot out of everyone. It even takes a lot out of the media and the staff, and we’re not the ones getting thrown around on the ice and exerting the energy necessary to compete at an NHL level. I think the fatigue manifested itself with a rough a rough first period on Sunday, which was an unfortunate time for an afternoon game to be scheduled. After the loss that afternoon, Dustin Brown said that “I think there’s a lot of unhappy players, quite honestly.” It’s not an excuse, but rather a reason of “why the team wasn’t at its best early on against Carolina.” Again, these are variables that all teams battle through, and Sunday was only game 20 of 82, so the effects may not have been profound. It wasn’t the most difficult turnaround, but the Kings had to play the very next day against a Panthers team that was in the middle of a long home stand; they responded with one of their best first periods of the regular season and pulled even on their first extended road trip. Again, this isn’t to glorify one win in a long season against a team that didn’t make the playoffs last season, but rather to illustrate the ebbs and flows of energy, emotion and fatigue associated with cross-continental travel. As Darryl has said, “they’re not machines.”

Alec Martinez had the line of the night when he told me after the game, “I’m just happy I put it in the right net this time.” Even apart from the own goal in Carolina, Sunday’s game didn’t represent Martinez’s best, and he rebounded with a solid performance in which he potted the game-winner. Jonathan Quick was also sharp, stopping 31 of 32 shots on a day that followed his early exit. As a whole, the Kings ceded very little to the Panthers other than the desperation time bombardment over the final 10 minutes. The best defense is a good offense, and the Kings’ tried-and-true possession game was an asset that allowed the team to play with the lead. John Stevens told reporters Monday morning, “I think it’s far more taxing playing from behind,” and the best antidote to any perceived weariness was to get off to a good start not only on the ice but on the scoreboard as well.

It matters little now, but I was surprised that Nick Shore’s diving attempt to stuff a loose puck past Al Montoya was not ruled a good goal. I’m hoping to get a clarification from the sequence later today from Darryl Sutter on why the play was first deemed incidental contact (and therefore not reviewable) before the Kings challenged the “interference on the goalkeeper.” The NHL’s ultimate decision was that “After reviewing all available replays and consulting with NHL Hockey Operations staff, the Referee determined that Los Angeles’ Nick Shore interfered with Florida goaltender Al Montoya before the puck crossed the goal line, preventing him from playing his position..” To me, that appeared to be a situation in which NHL Rule 69.7: Rebounds and Loose Pucks could have been applied. That rule states, “In a rebound situation, or where a goalkeeper and attacking player(s) are simultaneously attempting to play a loose puck, whether inside or outside the crease, incidental contact with the goalkeeper will be permitted, and any goal that is scored as a result thereof will be allowed.” Again, it matters little, because the Kings won the game, and the park-and-ride mentality tells me that the team has moved on. But I’d like to hear Darryl’s take on the play yesterday, if he’s willing to share his review.