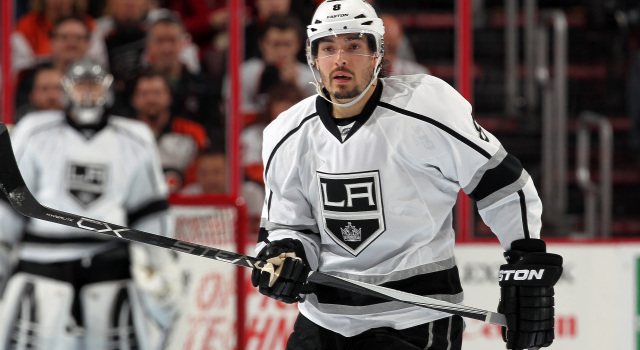 That Drew Doughty has taken minor penalties in seven straight games is… unexpected? Uncharacteristic? Bizarre? None of the above?

“If our player takes penalties in seven or eight straight games, that’s not weird. That’s a bad stat,” Darryl Sutter said after Los Angeles’ 4-3 loss to Carolina after a game on Sundayin which Doughty was whistled for two minors. One was an interference call, and one was an errant puck-over-the-glass foul.

But it is atypical of Doughty, who through his first 537 games had registered minor penalties in three consecutive games seven times but never for any longer streak. And then, over the last seven games have come three tripping minors and two delay of game minors to go along with holding the stick, hooking and interference infractions. Seven games, eight minor penalties.

“I’ve got to get it out of my head, because that’s all I’m thinking about right now,” Doughty said.

Strangely, the current stretch of consecutive games with a minor followed a string of eight consecutive penalty-free games for the Kings’ leader in ice time. He’s a fixture on the penalty kill, too, having averaged three minutes and six seconds of shorthanded time on ice per game, the most on the team amongst active players.

“Yeah, I’ve never really had one of these before, but a lot of the penalties we’re getting, I’m just trying to compete, out-compete the other guys,” he said. “Sometimes I’m taking penalties and just having a strong stick, and I don’t necessarily agree with all of them, either. It’s bad, I can’t be taking penalties like that. The team needs me on the ice, they can’t have me in the box, especially in PK situations, [because] that’s a situation that I’m pretty good in.”

The string has occurred during a road trip in which Los Angeles has found itself in penalty trouble – and has paid the price. Though they entered the trip with 15 successful kills in a row, the Kings have allowed power play goals in each of the last three games and have been shorthanded 16 times.

“If we have the puck we’re not going to be taking penalties, unless it’s an interference or something like that,” Doughty said. “I think one of the biggest part [of the penalty spike] is we’re turning over too many pucks – that causes us to maybe do a little bit too much of panic, try to make up for that mistake, and in return, gives you a penalty.”

Drew Doughty, on the state of the team during the road trip:
We know that we’re not playing good enough right now, every single guy in that room knows that they need to step up their game both individually and as a team. We all need to step up our game, when we come on the East Coast trips, they’re must-wins, and we absolutely have to win this game tonight and get back on the right foot, and obviously going to Tampa for the next one, we want to win that one too. We know we’re not playing well, and we know how much better we can play.

Doughty, on their game against Florida last month:
Yeah, they’re a good team, they had a few guys that weren’t in the lineup that are in tonight that I think make a big difference, I think Barkov is the one guy that comes up in my mind – he’s a very good player. They’re a good team, they’ve got a lot of really good players, veteran players, young players, they’ve got a good mix, and they’re going to be tough to beat tonight.

Doughty, on facing Willie Mitchell:
When we’re on the ice, he’s just another opponent. Obviously after the game or something like that I’ll definitely talk to him. He’s a great buddy of mine and definitely a guy I miss having on our team every day, but when we play against him, we want nothing more than to beat him, we don’t want him to have the bragging rights. We want to beat his team, with him being the leader of his team especially, when we beat him, we’ll always have that on him.