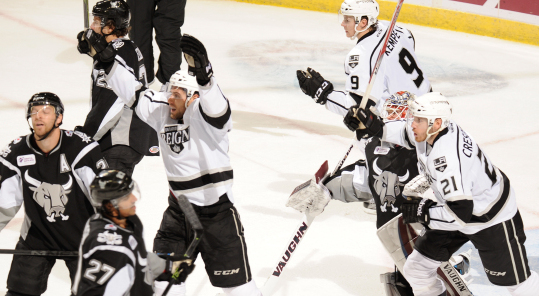 The Reign picked up the all-important four points in their two-game road trip to Texas over the weekend, defeating the San Antonio Rampage 4-3 in overtime on Friday, followed by a 7-6 thriller on Saturday against the Texas Stars.

Following the AHL weekend slate, the Reign (10-2-2-0) are first in the Pacific Division, and first in the Western Conference with a winning percentage of .786.

The Michael Mersch Meter
Michael Mersch had three goals on the weekend, extending his team goal-scoring lead to nine as he continues to be the measuring stick on the Reign as to which forward looks most NHL-ready.

The left winger’s net-front presence is certainly something to keep an eye on. Two out of his three in Texas were right on the doorstep, the most emphatic being the diving OT winner where he jumped on a rebound.

For the record, Adrian Kempe and an unlikely candidate in Jordan Samuels-Thomas are second in goals with five apiece.

Circle that
Center Nic Dowd has officially emerged as the go-to faceoff guy in the clinch.

Dowd’s clean overtime faceoff win in the Rampage zone set up Vincent LoVerde’s drive off the boards that resulted in Mersch’s winner and again against Texas, Dowd won a crucial endzone faceoff with 4.9 seconds left to ice the game.

Also, if you haven’t seen it yet, this is a great Q&A that Sheng Peng of SB Nation’s Jewels from the Crown did with Dowd recently.

Penalty kill is human
The one thing we did learn over the weekend is that the Reign penalty kill has a human side to it. Ontario gave up four power play goals in the two games, which was more than their first 12 games combined where they allowed just three.

Certainly it doesn’t help that they had issues staying out of the box: eight penalties vs San Antonio and nine vs Texas. Of those 17 total penalties, 13 resulted in power play opportunities for the opposition due to a few sets of coincidental minors.

Still, the Reign are right up there when it comes to PK percentage at 89.7, good for third in the AHL.

What the future holds
After giving up six goals in Saturday’s win, head coach Mike Stothers said the team looked like it needed a few practices to button things up a bit, but did reinforce that there was no overall concern.

They’ll next play host to the Stockton Heat (the Calgary Flames’ AHL affiliate) on Wednesday at 7 p.m. at Citizens Business Bank Arena.