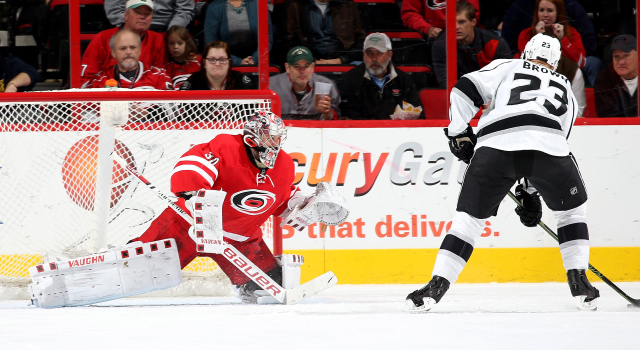 On whether the team was more undisciplined than normal:
It’s hard to win games when we’re killing as much as we killed tonight. We had to kill two five-on-threes. It taxes those guys that kill. So we’ve got to be more disciplined. It’s something early on in the year that we had trouble doing. There was more of that tonight. We’ve got to stay out of the box. That goes a long way.

On whether some of the penalties were the result of frustration:
It’s hard to say. [Reporter: They’re all different.] Yeah, I mean there were some that I don’t think… Kopi is probably our smartest player and maybe he just had a… he said it right after, he blacked out and didn’t even think about it. It’s almost like an instinct thing, but that’s our smartest player. A penalty like that is just, like I said, instinct.

On his approach on his penalty shot:
That’s a move I’ve done. We always talk about the goalies before the game. That’s probably a move I’ve used… it worked quite a bit right when the shootouts were implemented, that was my move. I hadn’t used it in a while. I’ve been shooting. On the penalty shot, I just tried to switch it up.

On how the team responds to its first back-to-back losses since the start of the season:
I think there’s a lot of unhappy players, quite honestly. A lot of us were here last year when we let it slide and, as a result, were not playing at the end of the year. The good thing about tonight is we have an opportunity to right the ship tomorrow night and that should be our focus on this plane ride and going out through tomorrow.