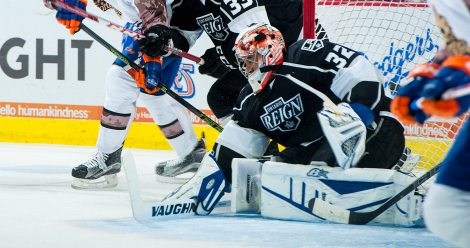 In easily the most wild game of the season for Ontario, the Reign outlasted the Texas Stars in a 2-hour, 42-minute 7-6 scoring marathon Saturday night.

The Reign never trailed in this one, but the score was indeed locked twice, the last being midway through the third. But the Reign’s Jordan Samuels-Thomas provided the winner, sliding home a pass from Andrew Crescenzi with 3:33 remaining in regulation.

Nevermind the 13 total goals that were scored, there 15 total penalties taken between the sides and eight in the second period alone. Michael Mersch and Samuels-Thomas had two goals apiece and Kurtis MacDermid and Sean Backman each had a goal and an assist. Goalie Ray Emery grabbed his first win on the season in three starts, stopping 31 shots.

The Reign (10-2-2-0) picked up four points on their Texas swing after an overtime win the previous night at San Antonio and Texas dropped to 9-7-0-1.

The first period saw six goals. The Reign went up 2-0 just 4:01 in on tallies by Mersch and MacDermid, resulting in John Muse being removed from his goaltending duties for the Stars in favor of Jack Campbell.

The Stars returned to make it a game at 2-2, all just 12:51 into the opening period on a goal by Greg Rallo and then another by Devin Shore on the power play. Mersch added his second of the night (and team-leading ninth of the season) on the man advantage to make it 3-2, which was followed by an Adrian Kempe wrister to finish the scoring summary for the first period.

The contest started to get out of hand in the second period as penalties piled up to complement the scoring barrage. Texas cut the Reign lead to 4-3 on an Esa Lindell goal less than a minute in, but again the Reign had a response as both Samuels-Thomas and Sean Backman scored to make in 6-3.

That set up Samuels-Thomas’ game-winner and a busy finish after Texas pulled Campbell for an extra attacker with over two minutes to go in regulation.