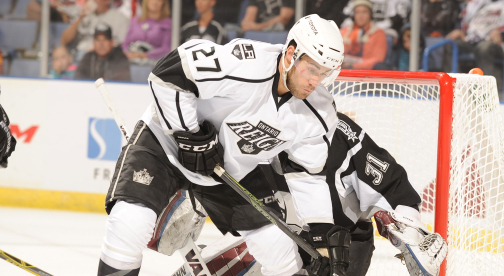 After every Reign away game we’ll try to catch up with Reign head coach Mike Stothers to get his take on things. Here’s what he had to say after Friday’s 4-3 overtime win over the Rampage and a short on what you missed.

Michael Mersch scored his team-leading 7th goal of the season 21 seconds into overtime and the Reign salvaged the win. The Reign, up 3-0 on goals by Ryan Horvat, Scott Sabourin and Sean Backman, let the Rampage creep back in. Ontario gave up a season-high two power play goals in the third and allowed the Rampage to tie it with less than two minutes left in regulation. Mersch’s tally avenged the Reign’s back-to-back overtime losses to the Rampage earlier this season.

Question: You had to like the start, but do you feel like with the penalties the team is playing with fire a bit?
Stothers: First of all I am pleased that we stayed determined and positive of the outcome after they tied it up. But why did it get to that stage? Penalties plain and simple!! They took three, we took six!! Now the bench is shortened and some guys are playing too much. It is tiring both mentally, and physically, to be defending all the time. Momentum shifts and all of a sudden they are dictating the play and zone time.

Question: After losing to these guys in OT twice before is there a “here we go again” feeling? What were the emotions like from end of the third to after Mersch’s goal?
Stothers: There was zero change of emotion, and no thought of here we go again. Our players do not dwell on past results. We have great leaders that believe we will always get the “next one.” Negativity is wasted energy.

Question: We talk a lot about development and the players learning from their mistakes.
What can they take away from this game and how pleased are you that they took what could be seen as a tough situation in the third and turned it into a positive, big win?
Stothers: We have a room full of good people and teammates. A big part of development is learning and handling adversity. You learn from experience, good and bad. Hockey is a game of mistakes, we all make them, coaches included. We try as a group to accept responsibility, minimize future misplays, and move forward. As I mentioned earlier we focus on the “next one,” the next shift, the next play.