So, what’s with the Kings’ recent stretch in Detroit? 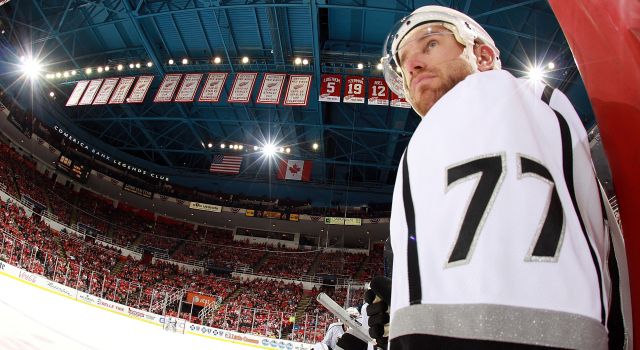 The Kings are 0-5-1 in their last six trips to Detroit, an interesting and at times excruciating record that has interestingly coincided with the club’s ascendance to contending for (and winning) Stanley Cups.

There was, of course, Niklas Kronwall’s tie-breaking “goal” on January 18, 2014, which came off assists from Jonathan Quick’s back and the protective netting. Jonathan Ericsson provided a tiebreaking dagger with 4.5 seconds remaining after a late Alec Martinez equalizer in a February, 2013 game, and a pair of Red Wings goals in the final five minutes earned the home team a one-goal victory shortly before a six-game Los Angeles win streak in March, 2012.

The Kings haven’t won in the building since March 9, 2011, having been outscored 26-12 over that stretch. Obviously, the Red Wings have consistently been very good during and well before the beginning of this current stretch.

“It’s something that’s really hard to build, and they’ve made the playoffs for 20-something years in a row, and that’s probably one of the more staggering feats when you look around the league,” Dustin Brown said. “I don’t know how many teams have made it ten straight years, so it’s just a credit to what they’ve built over the last couple of decades.”

When entering Joe Louis Arena, teams have to be prepared to face a Red Wings squad bursting with excellent depth and skill.

“They’ve got a lot of great players, especially up front,” Kyle Clifford said. “They’ve got a lot of depth in their scoring, and it’s not just with Zetterberg or Datsyuk. It’s right down their lineup, so we just have to be aware of that and be ready for that. I think the preparation needs to be dialed in tonight because we know it’s going to be a hard game.”

The Red Wings have struggled to score early on this season, but that won’t last. Pavel Datsyuk now has four games under his belt and is ready to find a rhythm, and Brad Richards, acquired over the off-season, will play for the first time in nearly a month. The Red Wings’ third line boasts Tomas Tatar and Gustav Nyquist.

That’s not to take anything away from Los Angeles, which has an enviable array of big, skilled forwards, but rather to predict that Detroit’s offensive malaise isn’t likely to last for much longer.

“Especially with the team we’re playing tonight, you obviously need to focus on Datsyuk and Zetterberg, but they have a lot of other players that have been producing for them for years now,” Brown said. “I think that’s probably one of the things where, you focus so much on them, and then they have these guys that are first or second year players who are making really good plays and finding ways to score goals, so it’s about checking from top to bottom.”

While the Kings have won two Stanley Cups in the last four seasons, the Red Wings have a wall outside the visitors’ dressing room that boasts dual groups of players who have won four Stanley Cups with the organization.

“They make it hard on you,” Clifford said. “They’re good at home, they check well, they’ve got good sticks, so you just have to be aware of that, and they’re not afraid to come down on you on the wall, so it’s just a matter of being prepared and knowing what to expect and knowing that it’s going to be a hard game.”

Not to be forgotten, Los Angeles has a very respectable record overall against Detroit, having gone 82-80-27-5 (W-L-T-OTL) in the all-time head-to-head series.