Reign play with fire in OT win over Rampage 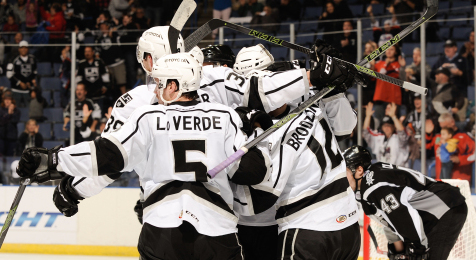 Finally, a hero for the Reign.

After losing back-to-back overtime games against the San Antonio Rampage earlier this season, the Reign had their turn in a 4-3 OT road win as Michael Mersch scored 21 seconds into the extra frame on Friday night.

Vincent LoVerde drove the net from the near boards after a faceoff win by Nic Dowd and with Mersch in front of the net, the winger hammered home the rebound past Rampage goalie Spencer Martin.

The Reign (9-2-2-0) were able to get the edge on the Rampage (9-1-5-0) but the victory came with some grief as Ontario watched its 3-0 lead evaporate late in the second and into the third period. The Reign gave up two power play goals in the third, the most in any contest for them this season, with the Rampage evening the score with just 1:36 left in regulation on goal by Joey Hishon.

Up 3-0 on first-period goals by Ryan Horvat and Scott Sabourin, both their second of the season, and a second-period tally by Sean Backman, the Reign allowed the Rampage to get back in it late in the second. Maxim Noreau cut the lead to 3-1 on a backhander that beat Budaj with 2:33 left in the period.

And as the third period started, Ontario had to kill what was left of a LoVerde holding penalty, but once that was complete, Kurtis MacDermid went off for tripping shortly after. That was the final straw as far as the seemingly unstoppable Ontario penalty kill was concerned. Colin Smith deflected a Nikita Zadorov shot past Budaj at 4:43 to make it 3-2.

Hishon’s equalizer came with Kevin Gravel in the box for a hooking penalty (one that he took in the Reign zone). Noreau’s shot from the left point bounced off the near boards and right to Hishon’s stick to set up overtime.

This time, the Reign picked up the valuable two points, instead of just one.

Granted, the last time these teams saw each other the Rampage were still housing goaltender Calvin Pickard and forward Ben Street. Both have since joined the parent club, the Colorado Avalanche, with Street suffering an unfortunate chest injury that will reportedly sideline him for three months.

Street had scored both OT winners against the Reign and Pickard backstopped both wins.

But Saturday night, Budaj was credited with the win, stopping 27 shots, plus he didn’t have any action in overtime due to the Reign’s quick work.

Ontario has now beaten every team it has faced this season at least once, and faces a team in the Texas Stars on Saturday night that they have yet to see.