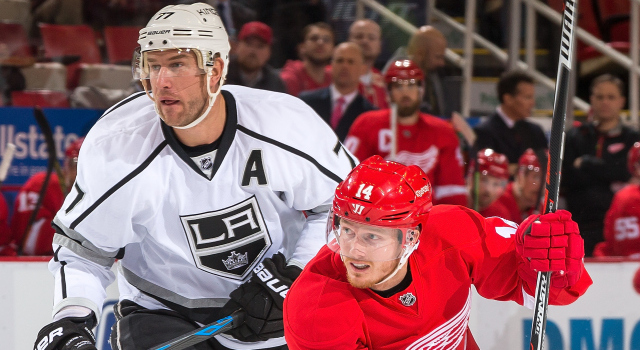 On having to come back from two goals down against Detroit:
We had lots of opportunities. If you give up three, meaning the other team scores three, then you’ve got to score four. That’s a big challenge in this league.

On what he liked about the performance:
We scored a shorthanded goal to get us back in it, we scored a four-on-four goal to get us back in it. Five-on-five, we don’t have four lines produce. The first goal against us is a soft penalty by Forbort. Two games in a row. It’s not acceptable in the National Hockey League. The second goal, was that the rebound goal, the empty net goal? Bad rebound, tap-in goal, and the other one was sort of between a rush and a soft coverage play – our left defenseman and our centerman. So we’ve got to score four. We had lots of opportunities to score four. Lots of opportunities. More than normal.

On Jeff Carter’s performance:
I think he probably had 10 shots. I don’t know what it ended up, but to me it seemed like every shift – we were basically double-shifting him and Kopitar as centermen.[Reporter: Seven going into the third period.] As I said, it felt like 10.