The long road ‘back’ for Lowry 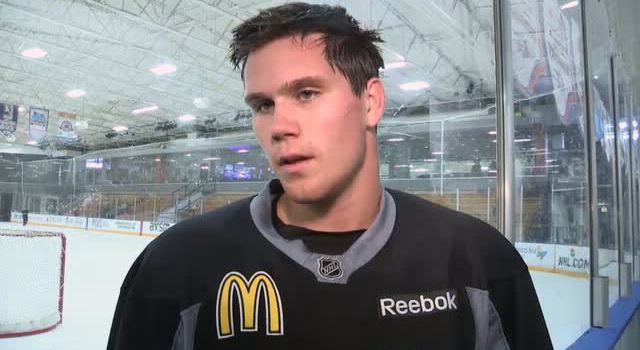 At least not for the type of hockey he wants to play.

Sure, he wore Big Red during his four-year Ivy League career at Cornell University.

But when you sign a two-year entry-level deal with the Los Angeles Kings like Lowry did on August 10 of this year, you aspire to be wearing the proper black, white and silver.

Instead it was red. Red, red, red. And along with that color comes the no-contact connotation. Stop. Steer clear.

Lowry was recovering from a devastating and lingering back injury.

And now he’s finally made his way back.

“I think just a strong, hard-nosed player,” Lowry said when asked to characterize his style of play. “Try and get the puck deep, play physical and get to the net, kind of grind it out.”

That’s not something you can do when you’re limited like Lowry had been until a few weeks ago, when he was finally cleared to shed the no-contact red for Reign practices.

And then last weekend came, when the 6-foot-2, 185-pound, Calgary native made his long-awaited Reign debut when the team faced Bakersfield.

“It was definitely exciting,” said Lowry, who plays left wing. “It was exciting to finally be back out there. It was good to get my feet wet.”

It had been a long time coming considering where and when his back issues began during his senior season at Cornell, which shortened his final campaign to just 11 games.

“I noticed it one morning and I think it just kind of deteriorated. I kept playing and it got worse and worse and it got to the point where I wasn’t playing anymore and trying to hopefully avoid surgery and I couldn’t do that,” he said. “Unfortunately after surgery I tried to come back a little too soon and re-aggravated the same injury and that’s what I’ve been dealing with now.

“It’s nice to finally get out there again and be (cleared for) contact and fully going in practice. Makes things a lot easier.”

It should be noted that Lowry comes from a great bloodline. His father, Dave, played in over 1,000 NHL games and his brother Adam, is in his second season with the Winnipeg Jets.

But this Lowry, a 5th round pick by the Kings in 2011, has been in a holding pattern of patience. He had to watch his college teammates struggle as he couldn’t partake. He had to sit out training camp for the Reign.

He calls the injury and the process one word: painful. It’s been a mental and physical battle because, as he noted, back injuries you can’t just play through.

“When I came to training camp, it’s difficult watching guys play games and be able to do all the drills while you’re just kind of sitting around and not doing what you want to be doing and trying to get ready for the season like everyone else. I think that was one of the tougher things,” he said.

Now he says he’s 100 percent health-wise and head coach Mike Stothers added admires Lowry, “for the time and effort and the work he put in trying to get back and ready to play.”

“I still have a ways to go as far as adjusting to the pace and getting into the swing of things, but I think I’m on the right track,” Lowry said.

“Perhaps he’s everything that he’s built to be,” Stothers said. “I would agree that from what I’ve been told and what I’ve read that he would seem to be a player that I would enjoy having around and on the team.

“I’m looking forward to seeing that.”