Shore’s assets quantifiable in metrics, not production (yet) 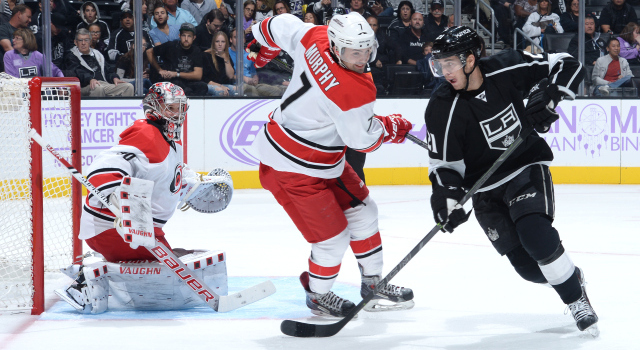 Before the start of the season, Darryl Sutter wasn’t as inclined to offer an evaluation of what he expected from Nick Shore specifically, but rather “the box” in which Shore was likely to slot. The box he referenced was the third line center position, and it “has to be a number, meaning production,” he said on October 2.

“What is that box? What’s that production in the league? What’s he got to do? So, who can do that? Last year, that box did not fill that number. It produced at the box-down number,” Sutter said, alluding to those who skated as the third line center – which included Shore, who finished with one goal and seven points in 34 games on both the third and fourth lines – combined to produce numbers expected out of the fourth line center position.

This year, Shore’s primary numbers don’t jump off a page, but any casual scanning of the secondary metrics indicate he’s doing a lot of good things that don’t necessarily appear in the scoresheet but help his team win hockey games – and that it would not be a surprise at all to see an upcoming production spike.

“He’s a really smart player,” said Dustin Brown, who has recently been skating on a line with Shore. “It’s kind of hard to quantify that in points and goals, but he does a lot of little things that make it easier for other guys to do good things. That’s, I think, probably something that most guys don’t notice, but the guys playing with him, and guys on the bench see it, and that’s probably the most important thing. He’s making these contributions that go unseen other than the 20 guys and the coaching staff. He’s a younger player, and it’s a process, but he makes a lot of really smart plays out there.”

Brown went into detail to describe the aspects of Shore’s game that become clearer from ice level – more on that in a moment – but it’s not just the unquantifiable evaluation of a teammate that serves as evidence. The numbers indicate that the opposition generates very little while he’s on the ice. Of players who’ve logged more than 100 minutes this season, Shore ranks third in the NHL with 18.03 shots against per 60 minutes and leads the NHL with a 63.6% Corsi-for rating (and his current linemates Brown and Trevor Lewis rank second and sixth in that possession statistic). Against the Philadelphia Flyers on Tuesday night, Shore’s line was dominant – underline it, dominant – in playing with the puck in the offensive zone. During five-on-five play, Shore was on the ice for 20 shot attempts for and only two against, and both Brown (+21 CF) and Lewis (+19 CF) posted similar possession metrics.

“Basically, all that data and stats are based on who our opponent is and more on a game-to-game basis than anything else,” Sutter said. “I think he’s a good player. If we’re not talking about the line, just about Shoresy, then that third line centerman, he’s got to give you 13-to-15 quality minutes, and if you’re not involved in special teams, then that means even strength. A lot of that analytical stuff comes into even strength areas.”

The analytics aren’t the be-all, end-all of a player’s evaluation, and at some point those percentages will have to turn into cold, hard production. There are indications they will do so: Shore’s 89.3% PDO (What is PDO?) is the fourth-lowest rate in the league, and beyond being completely unsustainable, is far and away the lowest rate logged in a single season by the Kings amongst qualified players since Brian Willsie’s 94.4% PDO in 2006-07. With a minus-seven rating that’s tied for the lowest on the team, it’s apparent that Shore has simply been unlucky as pucks have found their way into Los Angeles’ net during the infrequent time he spends in his defensive zone.

It’s also not as if he’s getting a heavy amount of offensive zone starts; to the contrary, his zone starts relative to the rest of the team is a -1.33%, meaning they trend slightly to the defensive. He’s certainly helped by a 53.9% faceoff rate that ranks second to Jordan Weal’s 57.1%. As Brown notes, his fancy numbers are partly spurred by his ability to make himself available for an outlet pass from his defensemen, leading to clean zone exits.

“I think one, his ability to move along the ice is pretty good. In today’s game, that’s really important, especially for a centerman,” Brown said. “But I think it’s partly the plays he makes with the puck lend more to getting out of the zone cleaner, and he’s always supporting the D. If you talk to some of our defensemen, he supports them really well. Again, him just being two or three feet back or in the right spot or slowing down for a half second just so they can get the puck in the right spot, and that’s like what I’m talking about, when he makes really smart plays, subtle plays that the average fan probably won’t even see. Some guys speed through the pocket there, [while] he finds that pocket for them and for the wingers. It just lends itself to having the puck more.”

-advanced statistics provided by War-on-Ice; additional reference via Jewels from the Crown

Nick Shore, on whether there’s anything he can pinpoint towards his shot suppression:
Not necessarily. I think it’s a combination of a lot of things, and obviously playing with good D back there, they’re going to get the puck up and out of the zone quickly, so that helps with that.

Shore, on whether he sees his line as “defensively-attuned”:
Yeah, but I think all of our lines are. I think everyone takes care of their own end. Every line’s got to contribute in some way in order for us to get the two points each and every night, so it’s always going to be the same thing, but certainly that helps.

Shore, on defensive zone exits:
Coming out of your zone clean definitely helps you create offense, and I think that’s one of the big things that we continue to work on – being able to come out of our zone with some speed, and then that translates into offense.