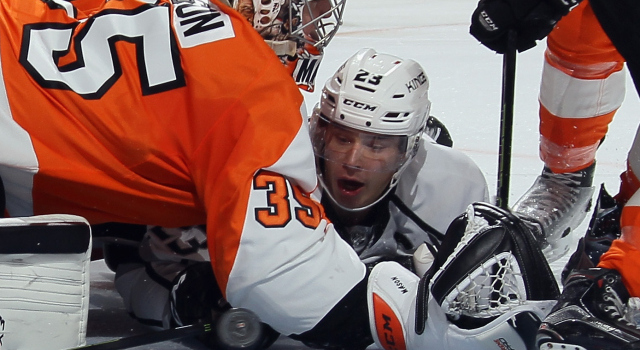 Adam Kimelman: Lucic scores late, Kings defeat Flyers in shootout
“The Los Angeles Kings acquired Milan Lucic with the hope that he could be a game-changing presence.

So far the power forward has produced. He’s scored a goal in six games, and the Kings have won all six, including a 3-2 shootout victory against the Philadelphia Flyers at Wells Fargo Center on Tuesday.

“Guess I gotta keep it up then, right?” Lucic said.”

Sam Carchidi: Kings slip past Flyers in shootout
“After a wide-open, breathtaking overtime in which both teams had point-blank chances denied by the goalies, the Los Angeles Kings escaped with a 3-2 shootout win over the Flyers on Tuesday night at the Wells Fargo Center.”

Jeff Neiburg: Flyers fall to the Kings, 3-2, in shootout
“Coming into the 2015-16 season, it was obvious there would be certain nights that the Flyers’ top line and goalie Steve Mason would need to win games for them.

That almost happened Tuesday, but Los Angeles’ Milan Lucic tallied a heartbreaking, game-tying goal with 55.7 seconds left in regulation to send the game to overtime.”

Dave Isaac: Flyers may have found a groove despite shootout loss
“More than a month into the season, the Flyers keep thinking they may have found that one moment that may send them on a consistent streak for a stretch of games.

Tim Riday: Flyers stay positive after blowing lead late in SO loss to Kings
“They just couldn’t close it out.

After hanging with one of the best teams in the Western Conference for 59 minutes and building two separate leads, the Flyers buckled under pressure, surrendering a game-tying goal with just 55 seconds remaining in the third period.”

Tim Riday: Flyers ‘don’t know why’ Brayden Schenn’s goal didn’t count
“I don’t know why that wasn’t a goal,” Voracek said after the Flyers’ 3-2 shootout loss at the Wells Fargo Center. “Schenner (Brayden) was lying on the ice. I don’t think it’s possible to try to kick the puck when you are lying on the ground. But it is what it is.”

Tim Riday: Instant Replay: Kings 3, Flyers 2 (SO)
“This is a tough place to be,” Gagne said. “The fans are so into it and I was here for 12 years, only two years in L.A., one in Boston, and one in Tampa. So I have a better taste of what’s going on here in Philly, but at the same time every time you jump on the ice, especially in the playoffs the crowd is so into it and they give you energy even when you have a hard time. They are going to push you and help you and they’re very loyal.”

Bobby Whittle: 10 observations from Flyers-Kings
“9. To no one’s surprise, Jeff Carter was booed. What was actually surprising was his failing to produce a point against his former club.

Carter started the night as a point-per-game player, with 17 in 17 entering Tuesday. His shot during the shootout was saved by Mason.”

Charlie O’Connor: 10 things we learned from a tough shootout loss