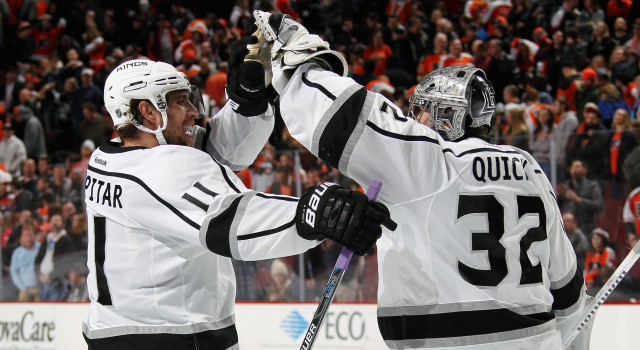 Jonathan Quick, on the team’s mentality throughout the game:
It was kind of back-and-forth, both teams creating chances all game. Like I said earlier, Mason made some great saves for them. Keep it low-scoring. We got a huge one on the power play in the first and then six-on-five. Anytime you score six-on-five, it’s a meaningful goal. That was huge.

Quick, on his strategy in the shootout:
You just got to stop them.

Anze Kopitar, on Alec Martinez’s play to break up a breakaway in overtime:
Yeah, Marty usually has really good wheels. So I’m really not surprised that he caught up to the guy. I’m not disrespecting the guy at all, Marty is usually faster than anybody else on the ice. [Reporter: Drew noted it was the beginning of his shift, which helped him.] Yeah, well that certainly helped. I guess we’re a bit lucky that we had him rested on the ice that time.

Kopitar, on whether he picked a spot or waited for the goalie’s move in the shootout:
It’s a little pregame scouting. We’ve known him a little bit from Columbus, too. I think everything comes in play. I just wanted to come down and really pick a corner and I just decided to go high-glove and it worked out for me this time.

Kopitar, on whether Milan Lucic is becoming more comfortable with the team:
Yeah, if he’s not comfortable now I don’t know when he’s going to be. No, he’s playing really well for us. He’s a force out there and that’s what we were looking to get from him, obviously. We’re very happy to have him and we’re going to need him to play like that.

Milan Lucic, on his game-tying goal with late in the third period:
I think even though it was a faceoff loss, Muzz did a really good job of keeping it in and I just changed sides behind the net. Kopi made a strong play up to the top and once again, Muzz gets the puck through and we get a lucky bounce off of Toff and post and I think my hands were halfway up when it landed on the goal line and it was just sitting there. It was a good job by the guys keeping the puck in and executing up top and getting the shot through. I was just able to find a loose puck just sitting there and you’ve got to be lucky to be good sometimes. And right now, I’m getting that puck luck for sure.

Lucic, on registering a goal in each of the last four wins:
I guess I have to keep it up then, right?

Lucic, on whether the win is an important first step on the road trip:
Yeah, we talked about it. How important it was to start off by getting a win and getting that two points to start off a five-game road trip here. Our road record is pretty good, 5-1 to start the year here. So you want to establish yourself as a good road team as much as you want to a good home team. It was good that we were able to get the job done. From the goalie out, it was a pretty good effort. Obviously a couple breakdowns, which happen in a game, but we stuck with it all the way until the full 65 minutes tonight and we were able to get a big win in the shootout.