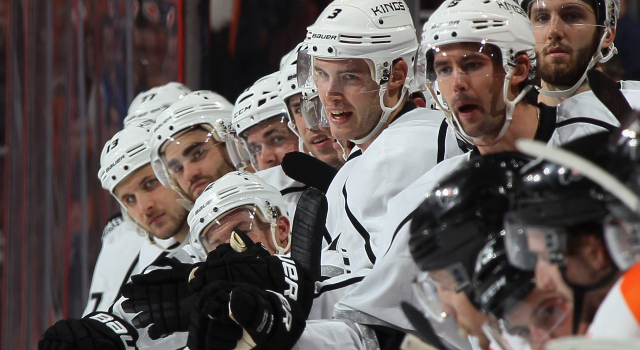 On starting the road trip with a win:
It’s good to get off to a good start. Played a good game. I’m thankful we got the extra point. Last year we had trouble doing that. It’s why we missed the playoffs.

On whether anything new was learned about three-on-three overtime:
Not really. We’ve won it three times. We’ve been fortunate enough to win.

On Jonathan Quick’s performance in overtime and the shootout:
That’s not something we’re learning in overtime. Goalies make great saves, and the other team scores. That’s how it was. There was two-on-ohs, two-on-ones. It’s the way it is. I think we did well to get it to overtime. We pulled the goalie and scored a goal and killed some penalties, especially in the second period.

On having an extra day of rest after Tuesday’s game:
Well, if there’s one thing about three-on-three that would be a concern, other than how exciting it is, it would be the back-to-back part of it. For the most part, teams probably only have seven, maybe eight guys who are going to play most of it, so if you look at how many minutes those guys are playing, it’s a lot.

On keeping the team sharp for shootouts:
If there’s something about tonight, they saw a lefty. If Kopi shoots high glove – not very often guys will shoot high-glove – it’s the other way. That’s usually a low-blocker shot. Really, it’s nothing to stay sharp on it. We wanted to start with Jeff or Tyler, so we got a righty, and then a lefty with Kopi, and a righty with Tyler or Jeff again.

On whether there’s added value in getting two points instead of one after training late:
Absolutely. We missed the playoffs last year by two points because of overtimes and shootouts. The four-on-four and shootouts cost us a playoff spot. That’s why I’m a big fan of the three-on-three, because there’s no way that teams that win shootouts should be in the playoffs ahead of teams that do it in regulation.