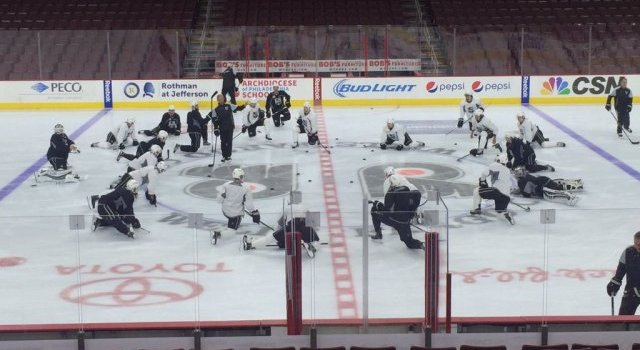 Good afternoon from the team bus en route to central Philadelphia. Notes from the morning skate:

-No changes are anticipated to the lines and defensive pairings, per this morning’s rushes. Tonight’s lineup should feature combinations of Pearson-Kopitar-Gaborik, Lucic-Carter-Toffoli, Brown-Shore-Lewis and Clifford-Andreoff-Nolan, with McNabb-Doughty, Muzzin-Martinez and Ehrhoff-McBain filling up the defensive slots. Jonathan Quick left the ice first and will be expected to start in net to open up the five-game trip, while Jordan Weal and Derek Forbort remained on the ice for extra work with Jhonas Enroth.

-There are numerous links between the Kings and Flyers organizations, and not only because of the players who have worn both jerseys or the general managers who have represented both franchises. Formerly with Los Angeles in Goaltender Development, Kim Dillabaugh is now Philadelphia’s Goaltending Coach and caught up with his former players, coaches and staff members after the Flyers’ skate. Also, 2012 Stanley Cup winner Simon Gagne will be honored tonight in recognition of his retirement. Former Flyers Kimmo Timonen and Danny Briere were also honored by the club earlier this season.

-Steve Mason is expected to start in net for Philadelphia, one day after he took what was described as a maintenance day. Michael Neuvirth, who was expected to start today, is instead day-to-day, according to Dave Isaac, so former King Jason LaBarbera will serve as the back-up after making the trip from AHL-Lehigh Valley.

-I spoke with Tanner Pearson, Jake Muzzin and Tyler Toffoli this morning; expect several additional stories to come out between today’s Darryl Sutter quotes and the game preview. Stay tuned…