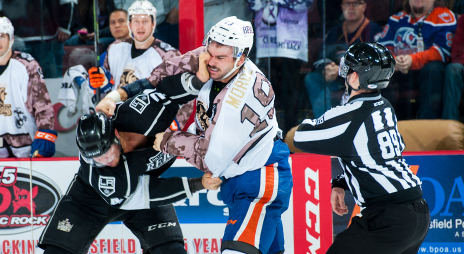 The Reign were shut out for the first time this season in a 3-0 loss at Bakersfield on Saturday night. It was just Ontario’s second loss in regulation this season as its record fell to 8-2-2-0. Ray Emery made his second start of the season and stopped 22 shots, but it was his second straight loss. Forward Joel Lowry also made his season debut after coming back from an injury.

Bakersfield’s forechecking presence in the first period resulted in Reign turnovers that led to goals. Ryan Hamilton opened the scoring at 11:57 of the first and Kale Kessy followed with another tally at 13:53.

From there, the Reign couldn’t recover and had very few scoring chances around Condors goalie Laurent Brossoit, who picked up his third shutout of the season in making 22 saves. The Reign gave up an empty-net goal with 1:33 remaining in regulation.

Here’s the highlight from the game courtesy of the Bakersfield Condors:

Reign goalie Patrik Bartosak (thumb), who was sent to the Manchester Monarchs on a conditioning assignment last Friday, started his first two games of this hockey season on Saturday and Sunday against the Toledo Walleye.

Bartosak had a bit of a rough go in his first game back, giving up six goals on 41 shots in a 6-2 loss on Saturday, but backstopped the Monarchs in a 4-3 10-round shootout win the following day.

Here are highlights from Saturday’s 6-2 loss to Toledo, including a great breakaway glove save by Bartosak at the 3:23 mark of the video:

Here’s the highlight package from Sunday. Check the 1:30 mark for another breakaway stop by Bartosak, the 3:50 mark features a stop where Bartosak has to go post-to-post and shortly thereafter is glove save from the high slot on Marek Tvrdon. At the 7:53 mark you’ll see Bartosak’s shootout-clinching save on Joel Chouinard.

The good news here is that the majority of the saves featured in the highlight packages are glove saves, the same hand in which Bartosak had thumb surgery on in early October.