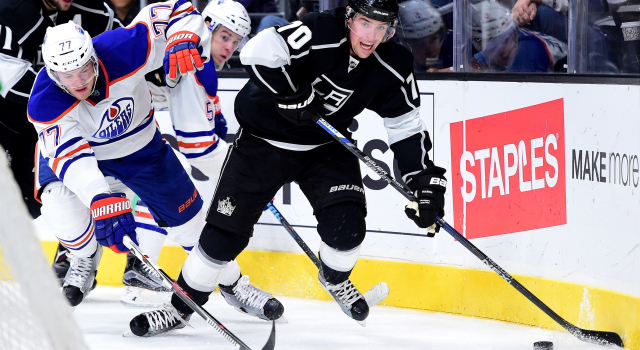 Marian Gaborik, on when he felt the momentum shift in the game:
Well, I don’t think it was the best game we’ve played with the ones at home, especially against a divisional opponent, which we need to get points in in these types of games, and we did. That’s the bottom line. They’re a young, fast team, and we let ‘em back in the game. Big goal by Shoresy there. I thought we created some momentum in the third. Huge goal.

Gaborik, on what could’ve been cleaned up in the game:
We didn’t play a north-south game like usual. We made a lot of turnovers in the neutral zone or our zone, which against this type of team, they’re fast forwards, they can make us pay. We’ve got to clean it up and go from there, but this is a huge win for us to finish this home stand with two points and go on the road.

Gaborik, on building chemistry with Tanner Pearson:
I think so. We had some fgod shifts together. We had some good forechecks, and we were close to each other and getting into pucks, trying to move into the offensive zone. Like you said, especially that first period, we had some good things going.

Gaborik, on contributing offensively:
It’s always good after a while to get on the board, especially in a win. The chances have been there, so I’m glad that it went in, and hopefully I can pick it up from here.

Gaborik, on whether it was important for his line to contribute:
Yeah, it is. Any time you get on the board, it’s huge, especially in the first period. You get that momentum, you get going, and we had some good shifts where we created good forechecks and we capitalized. That’s the bottom line.

Tanner Pearson, on the win:
I think it was important we got off to a good start getting that first one, and then kept it rolling. We kind of let our foot off the gas pedal in the second period, which kind of cost us, but I thought we rolled our line pretty good today.

Pearson, on his goal:
I just wanted to get it back on net. I figured the quicker it was, the better chance I would have of fooling the goalie. Luckily it went back bar.

Pearson, on Jonathan Quick’s performance:
I think you could say that about our goalies for the past stretch. They’ve been playing outstanding, and we’ve got to keep on doing our job to support them.

Pearson, on Edmonton generating quality looks:
I think, like I said, we took our foot off the gas pedal in the second period. We let them lose their speed and didn’t close on them, and it ended up costing us. But fortunately enough, we were able to get that last one.

Pearson, on the forechecking:
We actually looked at our forechecks the other practice day, so we were able to clean it up, and obviously it helped us out tonight and we were able to generate pucks to the net, and it worked out for us.

Pearson, on whether this game helps build towards permanence with his line:
I mean, we’d obviously like that to happen. I thnk the longer you’re together, the more you build chemistry. You look at Carts, Looch and then Toff, and what they’ve done playing together for such a long time. I think it’ll be good if they do stick to get chemistry throughout all the lines, and I think that’d be beneficial in the long run.

Nick Shore, on scoring the game-winning goal:
It feels good. I mean, any time you can help the team out and get a big two points at here at home against a division team, it’s good.

Shore, on the team’s effort after Edmonton had equalized:
It’s big for us. I think as we look back, there’s definitely a lot of things that we can do better, but at the same time, we come out here looking to get two points, and that’s what we did.

Shore, on lines other than Jeff Carter’s line contributing:
Well, that line’s been great all year. Obviously they’ve carried a lot of the offense, but at the same time, I think any time you’ve got all four lines going, I think that’s going to help this team out a lot.