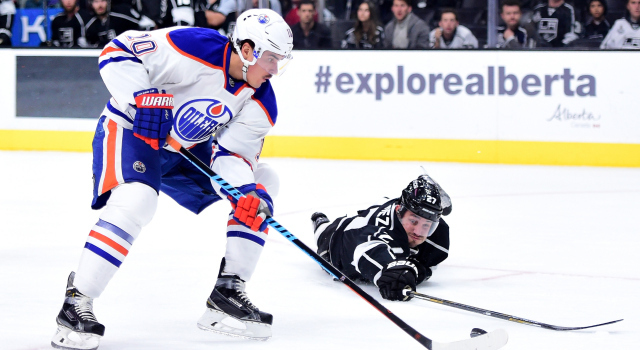 Taylor Hall, on whether it’s a tough loss after they tied the game late:
Yeah, we played a really good game tonight. The first five minutes, they took it to us like they do a lot of teams in their own building. But as the game wore on, I thought we had control of the play and we definitely played well enough to win. But these close games, it would’ve been just really nice to get that to overtime and see what happens, but a lot of things to be proud of there.

Hall, on whether it seems like their mistakes are directly leading to goals against:
Yeah, that’s tough. I thought we had a lot of chances to score tonight. It was great we got three, but it would’ve been nice to get a couple more and not wait until the last five minutes to score. Our goalies are battling. It’s a team thing right now. We’ve got to eliminate those Grade-A chances.

Hall, on what kind of identity they are developing as a team:
Yeah, we just want to be a team that plays until the end and not worry about the score so much. We want to be a team that wins, first and foremost. I think we’re getting closer to being a team that can battle for wins in tough buildings like this. We’re missing Nuge and obviously Connor tonight. So being a little bit shorthanded, we put in a really good effort.

Teddy Purcell, on whether their time on the penalty kill affected them:
Yeah, we’ve talked about that. Todd mentioned it, especially in the offensive zone. They’re 200 feet away from us, they’ve got to go through six guys to get a goal, so we don’t need to put ourselves in those chances. So it’s definitely something we need to clean up.

Purcell, on how he feels after registering a goal and an assist:
Personally, I’m starting to feel better. A bit of a sluggish start to my season, but the last 10 games or so it’s really nice when you’re playing with two guys that are real hot. I thought our line did a good job tonight. We did things the right way and we had a little bit of success.

Todd McLellan, on whether mistakes prevented the team from earning a win:
That’s a good way to describe it right now. I think we’re all torn, emotionally torn, because the drive to come back against a good, hard team. But that seems to be our mantra right now, but then the mistakes and O-zone penalties and mistakes at the end seem to cost us again. So we’re in a viscous cycle and we need to find a way to get out of it. Individuals have to be better in certain situations. We have to play smarter as a team. We can’t afford the extra two mistakes we made tonight. We can’t outscore our mistakes and we have to learn that lesson.

McLellan, on whether it’s tough to have patience after an early deficit:
It’s tough. It’s tough on everybody. Guys laid everything they had on the line to fight back and we made some mistakes on situations that we worked on, that we practiced and we should be able to take care of. You’ve got two offensive zone penalties in the last six or seven minutes of the game, unacceptable. I think we’re four of our last seven penalties were in the offensive zone for tripping, hooking, holding. Not going to win like that, not with our team.

McLellan, on whether the early deficit was the result of a young team:
It’s a product of mistakes that are preventable. It’s either the player’s error at that given moment, the players are skilled or talented enough to handle those moments, or it’s through delinquency. I don’t think it’s the last two. I think it’s just erroring at the moment and sometimes there are better players on the ice than you as an individual or you collectively as a pair. But your positioning, your sticks, your ability to play together or as a team should be able to overcome that. Right now it’s not happening all the time for us.