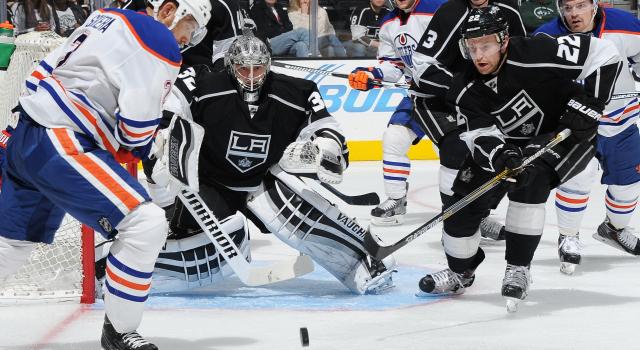 On the win:
I think we were not that sharp in the middle part of the game, and they’re such a good skating team and they got some open ice on us, and two of the goals were rush goals. I think the Hall goals, the defense didn’t make very good reads on ‘em. [Reporter: They can do some pretty amazing things at some pretty high speeds.] Yeah. Actually, with Nugent-Hopkins being out, the way they had those guys split up, our defense had a hard time handling ‘em tonight.

On the importance of Tanner Pearson and Marian Gaborik contributing:
Well, Gabby was good early. Tanner’s been good. Isn’t that what Gabby’s supposed to do? So ‘how important is it?’ Pretty important. That’s what he’s supposed to do. I mean, it’s not really any magic or some recipe there. He’s supposed to produce.

On what needs improvement:
We’re going on a long trip for, what is it, five games. We’ll see how we match-up as we go.

On Anze Kopitar’s performance:
He played a lot. I thought both him and Jeff played well. They gave us good minutes. There were both lots for those forehand D-zone draws, which probably guts ‘em out probably a little bit tired. I thought he was fine.

On playing 12 of the first 17 games at home:
I did not like it. I wouldn’t mind playing every other day like that, but we had way too many two days and three-days in between [games]. When you lose a game, you lose your edge a little bit, and when you win, you have trouble getting in game mode again. It was evident lots of times. If you look at the times where we had three days between games, we did not play very well that game coming back.