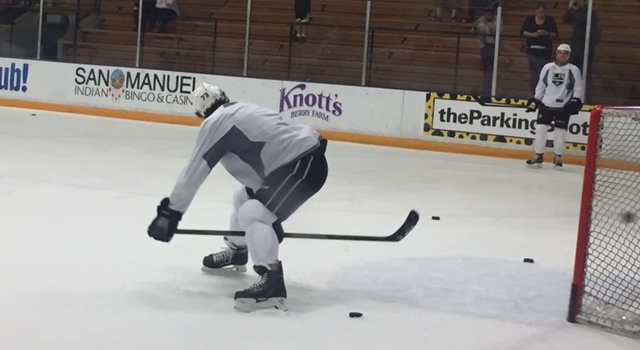 Good afternoon morning from Toyota Sports Center, where the Kings have left the ice in advance of their game tonight against the Edmonton Oilers (7:00 p.m. / FOX Sports West / CBC HNIC / KABC 790 / I Heart Radio).

-Hockey Night In Canada put together a feature on Milan Lucic that will run during their broadcast of tonight’s game. Rich Hammond and I (as well as several other reporters, I believe) spoke with a producer in front of a camera earlier this season, so it’ll be interesting to see if snippets of our conversations are included in the final piece.

Here's a sneak peek at our feature on @LAKings' Milan Lucic. Watch it in full tonight during #HockeyNight in Canada. https://t.co/afFDrQ2cmI

-Great and unexpected Saturday morning development: Bobby Orr was in the house! He and several friends observed the skate from the bench with Darryl Sutter and met with Drew Doughty for several minutes before introducing himself to reporters. I’ll have stories on both Doughty and Anze Kopitar up on the site today. Kopitar took part in the morning skate and will be available for tonight’s game after blocking a pair of shots late in Thursday’s win over the Islanders. The more ominous-looking of the two blocks came off Nick Leddy’s blast from the left point, which caught Kopitar in the lower leg.

-It was an optional morning skate, so line rushes weren’t held. Derek Forbort and Jordan Weal remained on the ice for extra work with Matt Greene (who remains on injured reserve) and Jhonas Enroth, so they’re not likely to be in tonight’s lineup. Jonathan Quick left the ice first and is the presumed starter for Los Angeles.

-There’s a cricket match at Dodger Stadium today – yes, you heard that correctly – and in addition to yesterday’s Justin Bieber events at Staples Center, downtown was a busy place. Somehow, it all comes back to hockey.

#Oilers walk around in anonymity in LA hotel as crowds flock to get autographs from world famous cricket players also staying here.

Rode escalator down with what I assume was famous Australian cricketer. He was mobbed when we got to the bottom. No clue who he was. #Oilers

Between teenage girls here last night for Justin Bieber and all the cricket fans lingering around this morning, #Oilers hotel has been busy.

–Also from Derek van Diest: Matt Hendricks (foot) will likely play tonight, Cam Talbot will start in net, and Andrew Ference is an option on defense. This will be Andrej Sekera’s first appearance back at Staples Center as a member of the Oilers.