Doughty’s play raises, as does his relationship with Stevens 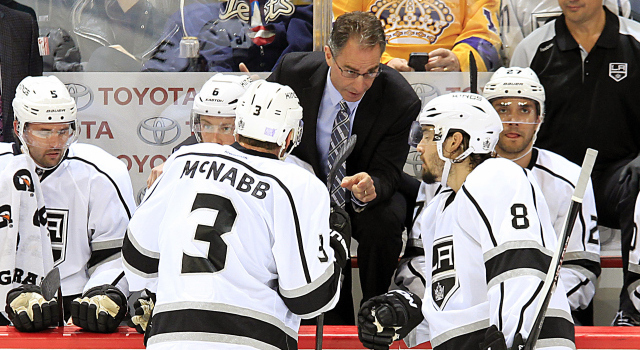 The early hours of Saturday, November 14 represented another typical morning prior to an NHL game, with Drew Doughty taking part in team meetings, getting his legs ready at the morning skate, and meeting with Bobby Orr.

No – wait, hold on, scratch that – Saturday morning was not a typical morning in an NHL season.

Bobby Orr! In the Kings’ facility! After the morning skate, Assistant General Manager Rob Blake escorted Doughty out of the dressing room and introduced him to whom many consider to be the greatest defenseman in the history of the sport.

Doughty, who’ll turn 26 next month, has an electrifying offensive element in his game, like Orr, and as the Kings have risen to win two Stanley Cups as part of three consecutive trips to the Western Conference Final between 2012-14, the defensive element of his game has sturdied and become more recognized.

And as Los Angeles has righted itself with 10 wins in 13 games, Doughty’s play has been at such a high level that you’d hope that those situated on the East Coast have remained awake to take in this extended stretch of play at Staples Center. If you’re looking for a demo reel to support a Norris Trophy candidacy, any recent televised Kings game would suffice.

“I think that I’ve been playing pretty well, Doughty said. “Doing well offensively, I think I’ve been getting a lot of shots through. Obviously a few more to go in for me, but I don’t’ feel like I haven’t had too many blocked this year which is the thing you look most for as a D-man. Defensively, I think I’ve been playing well, playing physical, good positionally. It’s great playing with Nabber. He’s an awesome D partner. I know I can help him a lot, teach him a lot of things that I’ve learned over my career. I’ve always had defensemen help carry me along. I’ve always had someone who was older than me as my D partner, so they always help me growing up. So I’m trying to help him out the same way.”

Interestingly, while attention was paid to Doughty and Orr on Saturday, it was the relationship between Doughty and Associate Head Coach John Stevens that came into a greater focus – and, as it turns out, there was some maintenance involved as Doughty gained experience in the league.

“He’s a really, really smart coach. He really knows his stuff,” Doughty said of Stevens. “Early on in my career, me and John kind of bumped heads a lot of the time and now it seems like we’re always on the same page and kind of know what to do. He just expects me to be a good leader, a good player every night, play hard, lead the right way and then obviously help Nabber as much as possible. [McNabb] is still a young guy in the league and he needs a little bit of help sometimes and I’m glad to do it.”

Stevens, who coached the Flyers from 2006-10 and was linked to a coaching vacancy in Vancouver in 2013 (and later to vacancies in Carolina and Pittsburgh), was promoted to Associate Head Coach in June, 2014. Highly regarded for his work with young defensemen and his role in shaping the Kings’ defensive identity, he is an excellent teacher for young defensemen, and this year, Los Angeles’ defense is younger than in recent years past.

“Drew’s no different than Muzzin and all these other guys,” he said. “We think the world of Drew, but we want Drew to get better, too. We think there are parts of his game where we just want him to be really consistently controlling the game each and every shift. I think the thing that’s under-appreciated with Drew is just how good he is defensively. Look at the play he made on the three-on-one in overtime [versus Nashville] that breaks up the play and makes a play the other way. Drew takes as much pride in his defensive game as he does anything else. When he’s really playing well defensively and his gaps are strong and you see how physically involved he’s been lately, it usually fuels the rest of his game. Drew’s an important player on our team and has a lot of responsibility, and we expect big things from him every night.”

Eventually, as Doughty has matured – it’s startling to think that this is already his eighth season in the league – he has been able to build on his relationship with Stevens, and that has benefited the team tremendously. Doughty said that their relationship changed “after we won the first Cup.”

“Maybe we didn’t see eye-to-eye on some things and at times he didn’t agree with things that I was doing and I maybe thought the other way,” Doughty said. “We eventually came to agreeance on everything, basically. And the way he teaches us is spectacular. I’ve never really had a D coach that really, really in depth teaches you and watches you and watches video with you to teach you things that way. So he’s been great for, I think, everybody.”

“Like I said, he’s a good coach and there’s never going to be a year where you don’t get fed up with any of the coaches at some point throughout the season. But for the most part, I think all the D are really happy with John and the guys that are on the PK. His PK is amazing. If we execute it, they’re not going to score any goals on us. I think everyone is really happy and he’s, like I said, a good teacher and that’s what you need. You need to learn a lot, learn every day no matter how old or young you are. You need to be learning every single day and he helps us with that.”