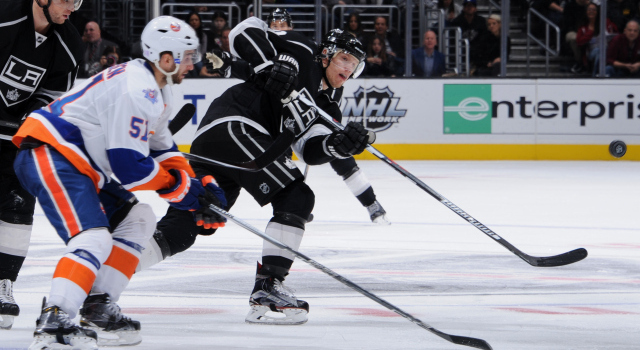 In Thursday’s Kings win over the Islanders, Los Angeles scored on the man advantage to improve its current power play stretch to 10-for-29 since a 4-1 win at San Jose on October 22.

It was a simple play. Calvin de Haan was whistled for a tripping minor, Anze Kopitar won the ensuing faceoff, fed Christian Ehrhoff at the left point, and he found Doughty, who crept towards the top of the right circle before unleashing a slapshot that beat Jaroslav Halak while Milan Lucic provided a screen.

Associate Coach John Stevens isn’t as entrenched in power play work as Davis Payne is, but he does work with defensemen, and he spoke about power play personnel during Friday’s media availability.

“I think Darryl does a really good job just crediting work, and guys who are working and winning battles usually go out, and that’s usually indicative of your power play,” he said. “But clearly we have some competition for ice time there. We have lots of guys who are capable in terms of skill set being on the power play, but I think Darryl’s rewarded the guys who are really working and playing with pace and tempo, and it’s certainly given us some production here lately and helped us win hockey games.”

Los Angeles has long boasted its array of penalty killers, and now, with a slightly more mobile defense that continues to be adept at pushing the play into the attacking end and playing up-tempo, the power play has also benefited from a variety of options. Doughty, Alec Martinez and Jake Muzzin are power play fixtures, while Jamie McBain also has heavy offensive upside, and Ehrhoff was acquired in part because of his success with the man advantage.

“Before the game we get a pretty good look at what the other team does, what their preferences are, and so you kind of have that in mind, but then it’s all about reading the play and what develops,” Ehrhoff said of the team’s power play looks. “Usually on the power play the best chances come off second opportunities. When you get the pucks moving and when you get them scrambling and you win a puck battle, then things will really open up for you.”

Ehrhoff, who didn’t play in the games against Florida and Arizona because Derek Forbort drew into the lineup, returned to action on Thursday and played a strong game in 15:10 of ice time.

“He’s a really skilled guy who skates well and can move pucks for us, and we want him to be a good defender and then make good plays with the puck. I thought he did that,” Stevens said. “I thought pucks separated well down low and he was able to transition the puck for us and get involved up the ice. I think his attitude’s been really good, and I thought he came back and responded well.”

Christian Ehrhoff, on Thursday night’s win:
I thought we battled hard, and the key last night for us was special teams. We got a goal on the power play and had a huge kill on the five-on-three against. That was what won us the game in the end, and Jhony played great.

Ehrhoff, on any preferences on power play partners:
It’s really tough to say, because it’s been kind of rotating. I’ve been there with everybody, with Dewey or Bainer or Marty, Muzz. Really, there hasn’t been a constant, but it’s a good thing. We’re scoring goals, and like I said, it’s a big part of the success for the team.

Ehrhoff, on whether he prefers to skate with a right or left-handed partner on the power play:
No, to me it doesn’t really matter. For me, it doesn’t really matter what side I’m on. At that point I was on my strong side, but I’ve played the right side before, too. It’s just different looks. It’s tough for the other teams, too, to fixate on who’s going to be out there and what look they’re going to get. So it’s different looks for us, and that keeps the opponent guessing, too.

Ehrhoff, on getting pucks through on the power play:
Yeah, that’s a good thing. The more pucks you can get on the net, the higher the chances that one is going to go in. It creates that movement of the PK, and it creates also the second opportunities, which are key. When you go one-and-out and you’ve got to break out again, that’s not good. That doesn’t create that momentum you want to do, and when you get those second and third opportunities, that creates some momentum. That gets you success in the end.