November 12: Practice notes and a chat with O’Donnell 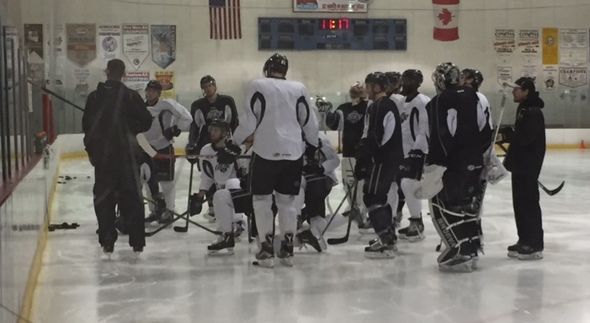 It was a fairly ho-hum morning practice following Wednesday’s win over San Jose. A long list of players were not skating and assistant coach Chris Hajt ran drills while head coach Mike Stothers took the morning off.

Here’s a bit of a roll call from the short, 45-minute workout at Center Ice in Ontario.

Following the skate Hajt said it hadn’t been planned maintenance day, but said it’s important to reevaluate and do what’s best for the players and that’s what the staff had decided on. He would not comment on the recent Bissonnette injury and deferred to Stothers.

Sean O’Donnell, the Kings’ Manager of Hockey Development and Alumni Relations, came to observe practice and I had a chance to catch up with him. He’s been trying to get out to Reign practices at least twice a week and mentioned that he’s been learning the ropes from development staff veterans like Nelson Emerson and Mike O’Connell. He had some interesting nuggets on players taking the next step, the culture of winning and more.

O’Donnell, on the benefits the Reign being closer:
For a lot of the (Kings staff) obviously the Kings is the main priority but at the same time the future is down here so you want to see them as much as you can and having the team 55 miles away as opposed to across the country is a win-win for everybody.

O’Donnell, on Mersch and Dowd:
Those are guys that I think, talking to some of the development guys who have been doing it longer than I have, the experience they gained last year in the Calder Cup, going through that kind of situation and how hard it is. You can play as many regular season games as you want and practice and all, but the experience that you get from that has been huge for those guys. Last year Nick Shore was down here playing with these guys on their run. Jordan Weal and those guys that are up right now. I think Mersch and those guys, they’re the ones that want to take that next step. They’re leaders now. You start down here just being a player down here and then being a leader down here and a guy you can count on and then you try to take that next step.

O’Donnell, on the importance of the organization breeding winners:
I think that’s every organization’s goal, that you want to win Cups, but I think the best way to do that is to create that culture. You look at what teams like Detroit were able to do. … Just the [Kings] organization breeds winning. And I was thinking about this yesterday. This team won the Calder Cup and from the team that won it you look at who’s not here: Bodnarchuk, Miller, O’Neill, Shore and Jordan Weal and their number one goalie Berube, and yet they’re 8-1-2 and right up there in first place again. Just goes to show you the coaching staff’s character. That tradition that the Kings organization is starting to get now, where, when you are part of the Kings organization they’re character guys, they can step in and fill for guys. At every level, especially this level, the best guys are probably gonna leave and move on and you have to have other guys fill in and do the job and these guys have done it unbelievable so far this year.