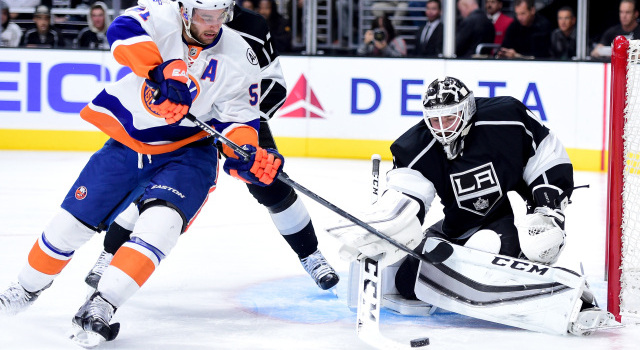 Jhonas Enroth, on drawing his first regular season home start:
It was great. Obviously, I really wanted to get a home start, and playing my first game here, I felt good about it, I was excited to play, and I think we played a pretty solid game and it was nice to get the win.

Enroth, on keeping himself prepared when going stretches without playing:
It’s really up to myself, I have to stay sharp during practice, stay on top of my conditioning and stuff like that, but I feel like I know what to do, I’ve been around the league for a couple of years now, and fortunately I’m used to it.

Enroth, on killing off New York’s five-on-three:
I think the guys that play in front of me did a great job there, I think Marty blocked a big shot there, and I was kind of lucky when I made one big save in that 5-on-3 span there, so that’s always huge when you can kill those off, and especially in a moment like that in the game, so it was great for us to get that momentum going.

Enroth, on his three starts:
I’m pretty comfortable, like I said, it’s really up to yourself to stay on top of it during practice and stuff like that, but games are a completely different animal I guess. It’s definitely a tough craft to manage, but these first three games have gone along pretty well for me.

Milan Lucic, on the effort in the win:
Pretty good, a lot of back and forth, I think both teams created chances for themselves, and obviously, you saw the skill set of that team, they really put the pressure on us there in that last period there, so good for us. I think we played a lot better in the defensive zone in breaking out the puck, and obviously Jhoney had another huge game for us, and he’s probably the biggest reason why we won tonight, but at the end of the day, it was nice to bounce back after kind of a poor third period against Arizona. We let that first one in, but we responded with a big power play goal, and just a lucky one in the second there.

Lucic, on his goal:
I just got in on the forecheck, and the puck went in to the net, and I tried to handle the puck, I kind of went down, and all of a sudden the goal horn went off, I didn’t really know what happened or anything like that, I thought Toff or Carts jumped in on the rebound there, but you’ve got to be lucky sometimes, and it was nice to get another one go off of me and in.

Lucic, on how the team protected the lead:
I think we did a pretty good job of it, obviously I think we could have spent more time in the offensive zone in the third period instead of just letting them come at us for a lot of the third, but like I said, we didn’t panic, and we were able to make strong enough plays to get out of the zone to not allow those second and third opportunities to pounce on, because those are the ones that get you sometimes, well, most of the time, and our D and especially our goalie did a great job of preserving the win here tonight.