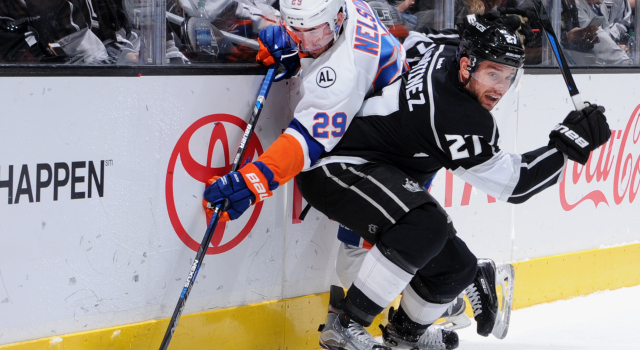 On Jhonas Enroth:
I thought he made some big saves in the third, especially on the penalty kill. Saw a lot of pucks in traffic, covered a lot of pucks for us. [Reporter: How important is it for him to come in and have no drop-off?] We needed to win a game. We need our goalie to win a game. If you look at the last couple games at home here, we hadn’t given up very much in terms of chances. Tonight we probably gave up more chances than we had in quite a while, and we need him to do that.

On whether the team played less “soft” against the Islanders:
I didn’t say that, did I? I said there were two or three soft plays, so there was a difference. I think we had trouble handling their speed. Clearly our power play and our penalty kill won the hockey game for us, end of story. Difference in the game. Scored a power play goal in the first period, and killed two men short.

On Milan Lucic’s net-front presence:
Yeah, I didn’t like our first couple power plays, so we just mixed it up. Needed somebody in front of the net, somebody to shoot the puck, so we had Looch and Kopi and Jeff out there, Ehrhoff and Doughty. Kopi wins the draw, Lucic goes in front of the net, Ehrhoff passes it to Doughty, Doughty shoots it. Old fashioned, but one good pass, one good shot, win the faceoff, somebody stand in front of the goalie. Sometimes it works. It used to always work. [Reporter: With a body like that, especially.] Yeah, the second goal also, I agree with you. It’s a forecheck goal. That line scored three or four goals of doing the very same thing in terms of their positioning and retrieving pucks. It’s the very same way they scored that goal. [Reporter: It’s not all fancy, is it?] No. There’s a price to pay to score goals.