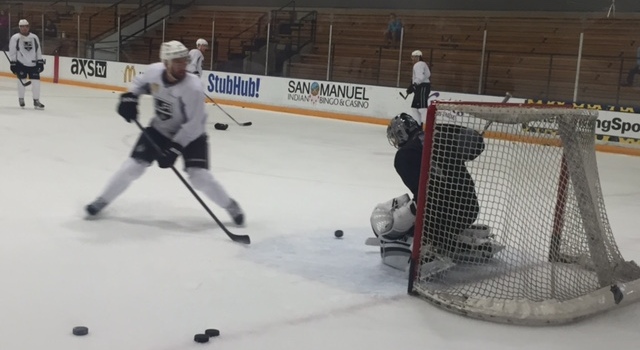 Hello from Toyota Sports Center, where the Kings have wrapped up their morning skate in advance of tonight’s game against the New York Islanders (7:30 p.m. / FOX Sports West / KABC 790 / I Heart Radio). Darryl Sutter wasn’t available to speak today, but I did speak with Davis Payne to gauge any similarities between New York’s Casey Cizikas line and Los Angeles’ energy line, which has often seen Andy Andreoff flanked by Kyle Clifford and Jordan Nolan. I’ll have a story on that as well as Bill Ranford’s and Jhonas Enroth’s reaction to the potential equipment reductions that could be implemented in advance of next season.

-And now, the nuts and bolts. It was an optional skate, and not everybody got on the ice. Jhonas Enroth was the first goaltender off, and he confirmed that he’ll be in net against the Islanders.

-Because it was an optional skate, there weren’t any real line rushes that offered a firm indication towards tonight’s lineup. But because Christian Ehrhoff didn’t linger, and because Derek Forbort and Jordan Weal remained on late with Matt Greene (who remains on injured reserve) and Jonathan Quick, it appears as though Ehrhoff will draw in for Forbort.

-With that in mind, I’ll take a stab at tonight’s lines and pairings: Pearson-Kopitar-Gaborik, Lucic-Carter-Toffoli, Brown-Shore-Lewis and Clifford-Andreoff-Nolan. Defensive pairings could be McNabb-Doughty, Muzzin-Martinez and Ehrhoff-McBain. I’ve discontinued the “Level of Confidence in Projected Lines” for this season’s game previews, but that stab would earn a solid “B” if it were still a thing.

More to come on a busy day in El Segundo…