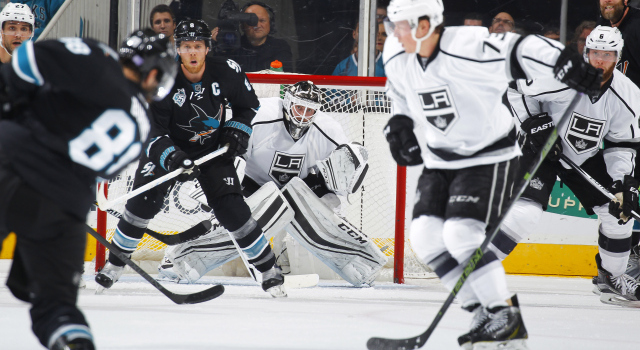 Jhonas Enroth will make his first regular season home start as a King when the New York Islanders visit Staples Center for their only Los Angeles appearance of 2015-16.

Though Enroth is officially listed at five feet, 10 inches and weighs 166 pounds, his size isn’t something that particularly concerns him. If he’s not big, his early season stats certainly are; the seven-year NHL goaltender is 2-0-0 with a 0.50 goals-against average and a .984 save percentage, having allowed one goal on 64 total shots.

“Honestly I don’t really feel small when I’m in the net. It’s more when I’m standing next to another big goalie or whatever, but I really don’t feel small in net,” he said.

But with goaltenders bigger and broader than they were before, it’s interesting to note Enroth’s success through two games with the Kings, especially at a time when goaltending equipment may be on the verge of shrinking.

On Wednesday, NHL Senior Executive VP and Director of Hockey Operations Colin Campbell confirmed when speaking with Bob McCown and John Shannon that the league will attempt to decrease the size of goalie equipment in advance of the 2016-17 season. This, some believe, would have a greater impact on increasing offense than when the NHL shrunk the size of goalie pads in advance of the 2013-14 season.

“It’s kind of funny, because when they reduced the length of the pads, most of the goalies liked it. They found they were moving better, so that one backfired,” Ranford said. “I just think they’ve talked about it. The pants and the arm pads, they’ve got to do something about it. It’s just over-the-top. Guys can’t even lift their arms around the league because their arm pads are so big. I’m not going to name names and stuff because that’s not the right thing to do. It’s the job of the league to come up with a solution for it, but all you’ve got to do – they did it a few years back – put side-by-side Patrick Roy when he entered the league and when he left the league. It’s night and day. I remember him talking about it. He’d sit in front of the mirror, and he’d just go down into his butterfly, and any holes, he’d just cover it up with padding. That’s where something’s got to be done about it.”

Ranford continued, noting how rules must catch up with the increasing size of the modern NHL goalie.

“You don’t want to change the size of the nets, because that just changes all history. That’s just the wrong way to go about it,” he said. “The reality of it is that the goalies are much better athletes, they’re bigger, and just the body mass – I mean, I was an average-height goalie in my time at 5’11, 185 pounds. Now you’re six-two, six-three, 210. They’re bigger. Net size doesn’t change, they’re bigger. And the other aspect of it, the puck hurts, but it doesn’t hurt like when we played. So they get hit, it doesn’t bother them. I used to change guys around the rink all season long. Guys get hit now, it doesn’t hurt as much, so they don’t get mad, they don’t chase guys around the rink. That’s the reality. When they came out with the high-density foam, it changed the holes, made the equipment lighter. There’s no horsehair put in pads any more, so you don’t deal with the fatigue that we used to deal with. They’re lighter. You can move quicker, obviously, and then arm pads. It used to be kind of like foam, and it hurt. Like, the puck hurt. Now, as long as they don’t find those seams on your arm or chest, it doesn’t hurt.”

Bill Ranford, on what has allowed Jhonas Enroth to be effective thus far:
I think the detail and the work he’s put into his practices. He’s been a number two in this league most of his career, and it’s something you have to learn and find a way to keep yourself ready at all times. He’s done a real good job with that.

Ranford, on the “thankless” job as a number-two goaltender:
It’s brutal. That’s why I retired. That’s exactly the reason why I retired. Didn’t like it. It’s one of those things where you don’t want to be a number one because you always do, but when you get into that role where you’re a proven number two in the league, it is a thankless job. You have to practice every day. You’re at the mercy of people like me and the other coaches, but he’s worked very hard. He’s worked at his game. I thought there were some tweaks that could help his game, and he had to trust in me to apply it, and it’s all on him. He’s put the work in. We’ve been fortunate here. We’ve always had guys who’ve had that ability to come in and win games for us, and that’s what you need.

Ranford, on whether he’d be overlooked if scouted as a teenager today:
Certainly, oh for sure. [Reporter: Would you get channeled into playing up front somewhere?] I wouldn’t necessarily say that, but you’d have to be really good, because you’d just get overseen. It’s like anything. If a pitcher’s got a live arm, he’s going to get looked at, even though you’ve got a guy who maybe doesn’t throw as hard but has great control and stuff. Well, when they see the live arm, they’re going to give that guy that extra opportunity, and it’s no different. You’ve got a guy who’s six-foot-three, six-foot-four and can kind of stop the puck versus a guy who’s five-foot-eleven?

Jhonas Enroth, on staying fresh during long stretches between starts:
I don’t think I’ve always been decent at it, but it’s up to myself, I’ve been around now a couple of years here, and it’s really up to myself to keep myself in shape, stay sharp in practice, so I only have myself to blame if I’m not sharp enough.

Enroth, on how Bill Ranford has helped him:
He’s been great, he’s been pointing out a couple of things that made a lot of sense to me, and some small things that we’ve been working on since Training Camp, and I’m feeling pretty good about it, so he’s been great, and obviously his track record has been pretty good too with a couple of the goalies here that he mentored, pushed them to another level.

Enroth, on whether he would be affected by a change in equipment size:
I don’t think so, people thought so last time we got shrunk. I definitely think there’s a way to get taller goalies smaller pads, compared to their bodies, because some guys pads, they’re ridiculous. I’m sure they’re going to find a good way, and I’m sure it’s going to be a lot of new things next season or whenever it’s going to be, but I’m sure they have that under control.

Enroth, on whether he noticed a difference when goalie pads shrunk:
Yea, I noticed, and I liked it. You get a little bit more mobile, and the pads just fit better, because there was a while there when everyone just wanted tall pads, but after the last lockout I think the pads got to a good size for me, and I like them.