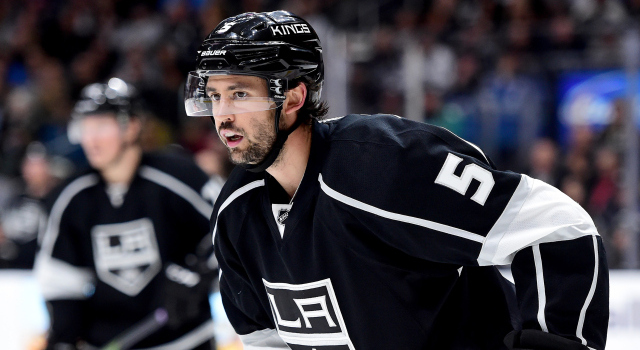 Jamie McBain is an interesting and offensively inclined player on a blue line in which he’s the third-oldest defender. The Kings are 22-9-4 in the 35 games he’s been in the lineup, but with only 14:25 of ice time per game, his own imprint on a game isn’t as defined as that laid by, say, Drew Doughty, who averages 26:34 of ice time per night.

But McBain has been good, and Darryl Sutter acknowledged the importance of his role on Wednesday. With his assist Tuesday night, he now has three goals, 12 points and a plus-five rating in his 35 games, numbers that come with a slight caveat due to the easier competition he generally faces.

“I think he’s played as well as he can, and I give him credit for it,” Sutter said. “He knows he’s a bubble guy, and he’s played as well as he can, and that’s what you want. He’s giving us some power play and some puck movement, and he’s done a good job. A little different circumstance for him this year. Last year he didn’t have a job. He came in because we were banged up. Went on a tryout, actually, and then signed, and then we brought him right up. He went to Arizona’s camp on a tryout, was released, and he was back in Minnesota, and then signed a tryout. … Went to Manch, and then signed an NHL contract and we brought him over. Played three or four games … [in Manchester].”

It’s not as if McBain came out of nowhere before his opportunity in Los Angeles; the 28-year-old totaled 18 goals and 67 points in his first 166 NHL games with Carolina.

18 different defensemen have suited up for Los Angeles since the beginning of the 2011-12 season, and McBain’s 35 games played with the club ties him with Keaton Ellerby for 11th place in games played over that span. Sutter spoke about Ellerby on Wednesday, as well as the other defenseman who have provided both quality minutes and the depth necessary to win two Stanley Cups over a three-year span filled with extended playoff runs.

“We need a lot,” Sutter said. “I was talking to Willie Mitchell the other night. That’s another guy you forget about. You take those guys out of our last Cup team – Willie, Robyn, Slava. Who else played a little bit there? Even the year we went to the conference finals, until we got Robyn, all the defensemen we used, I think we had Davis, Scuds, we got Keaton. If you look, if you get to that point, that’s a hell of a job to do that, and look at all the guys we had.”

That the Kings are finding some success with a younger defense is one of the narratives that will travel with the team for as long as they do so.

“Now all that experience is gone,” Sutter said. “Now these guys can’t be in and out, can’t be making plays that are losing games for you.”