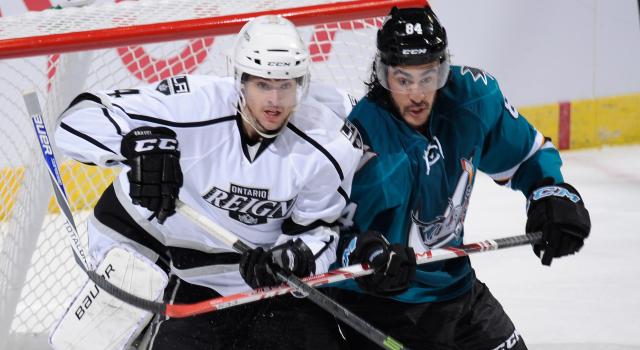 Reign pre-game notes
–Forward Paul Bissonnette, who returned to the lineup last Thursday vs. San Diego from a groin injury, is scratched tonight. Defenseman Zach Leslie will draw in his place, meaning we may see some double-shifting on the forward lines.
–The Reign are 1-1 against the Barracuda this season, winning at home by a 3-0 score on Oct. 24, and dropping a 4-2 decision at SAP Center on Nov. 1. The loss to the Barracuda was the Reign’s first and only regulation defeat this season, but also came on the third game of a back-to-back-to-back. Needless to say, the Reign (tied with San Antonio and San Diego for the Pacific Division lead) are the favorites in this contest.
–The Reign are coming in off a 4-0 win over Stockton last Saturday, but for head coach Mike Stothers, it was a sloppy victory where he told his team they were, “flirting with some problems.” “Luckily it didn’t come back and bite us because a lot of time you look back as the season goes and you’re looking at standings and seedings and you’re looking back at games where maybe you let a point or two slip away,” Stothers said.
–Can the Reign possibly record a hat trick of hat trick games? The Reign have won their last two contests and Adrian Kempe (last Thursday in 4-1 win over San Diego) and Jordan Samuels-Thomas (last Saturday in 4-0 win over Stockton) accomplished the feat.
–Goalie Peter Budaj, he of the if it ain’t broke don’t fix it category, will get his ninth start of the season. Budaj leads the league in wins (7), GAA (1.31), SV% (.947) and SO (4) and is coming off a 38-save performance against Stockton.
–The Reign will wear special camouflage jerseys featuring their team colors for Military Appreciation Night in honor of Veterans Day. There will be a live auction after the game for each jersey with proceeds benefitting Bob Hope USO Ontario.

Scouting the opposition
–The Barracuda will be without defenseman Mirco Mueller and forward Nikolay Goldobin as both were recalled by the Sharks on Tuesday. The 20-year-olds each have a goal and an assist this AHL season.
–San Jose is in a bit of a rough patch with just one win (that being over Ontario) in its last six games at 1-4-0-1, but if history is any indication this early in the season, we could see a hungry team at CBBA. San Jose’s recent win over the Reign came after it had lost back-to-back games by 3-0 scores. “We know it’s a good team over there and we’ve seen them enough this year,” Stothers said. “The coaching staff and a lot of the players are the same from last year when they were in Worcester … there is some familiarity with them. We’ve got to better than we were, say, Saturday night.”
–This is the first in a 7-game road swing for the Barracuda. They’re 2-1-0-0 away from the SAP Center this season.