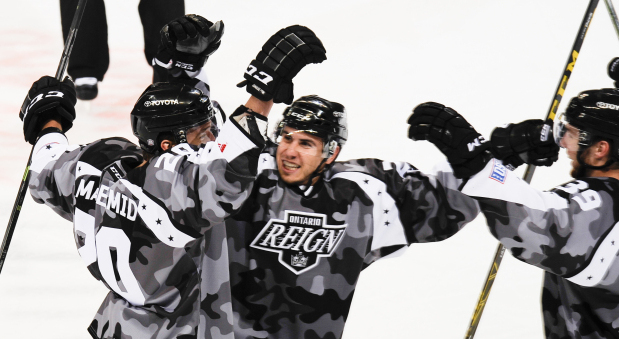 Behind two first-period goals the Reign dominated early and survived late by killing off a 5-on-3 in the waning moments of the third to grab the season series edge against the San Jose Barracuda in a 2-1 win on Wednesday night at Citizens Business Bank Arena in their third meeting of the season. Dominating early: Defenseman Kurtis MacDermid scored his first pro goal on a shot from the point and forward Sean Backman followed with his second of the year. Surviving late: Caught with too many men on the ice with 3:47 left, it only made matters worse when Michael Mersch took a high-sticking penalty moments later to give the Barracuda a 5-on-3 for 1:19. The Reign’s No. 1 PK suffocated the Barracuda and the game ended with the home fans on their feet. It marked Ontario’s third straight victory and the eighth of the season for goalie Peter Budaj, who stopped 16 shots.

Three stars
–Kurtis MacDermid – The 21-year-old AHL rookie scored his first pro goal on a shot from the point that put the Reign up 1-0 at 11:11 of the first period. Originally the goal was credited to captain Vincent LoVerde, but the AHL scoring officials went back and got it right.

Here’s a look at the Sauble Beach, Ontario, native’s tally:

–Sean Backman – The winger was moving along quietly leading the team in points through nine games (all assists) but now in the 11th game, Backman hit the scoresheet in the goals column for the second straight contest. The Yale alum has arrived. His shot off a pass from Adrian Kempe over Barracuda goalie Aaron Dell’s left pad held up as the game-winner.

A look at Backman’s second of the season:

–The Reign penalty kill – The Reign have been holding down the No. 1 PK spot in the league and they showed it off to the highest extent late in the third period. After getting caught with six skaters on the ice, Mersch, one of the team’s top killers, was called off for high-sticking. So make that 1:19 of 5-on-3 work and it was really no problem at all. San Jose couldn’t even register a quality scoring chance and opted to pull Dell once it went back to having a one-man advantage. It was a suffocating performance and almost baffling.

–Jeremy Langlois’ goal that put San Jose down 2-1 midway through the second period shifted the entire game as prior to that, the Reign were enjoying a dominant start and the Barracuda were barely in it. Langlois beat Budaj after a nice move around MacDermid and after that we saw a fight (Scott Sabourin vs Trevor Parkes) and power play chances traded in an active third period.

Stat fact
–3 – Power play goals allowed this entire season by the Reign in over 50 chances, none more important than the 5-on-3 to end this one.

This and that off-ice
The Reign wore special camouflage jerseys in their team colors in honor of Veterans Day. Those jerseys were auctioned off following the game with goalies Budaj and Patrik Bartosak along with captain LoVerde’s sweaters drawing the most at $2,000. Proceeds are to benefit Bob Hope USO Ontario.

Next up
The Reign are scheduled to practice the next two days before heading up north for a 7 p.m. contest against the Bakersfield Condors (Edmonton Oilers affiliate). Ontario blew out Bakersfield 5-0 on the road in their season-opener back on Oct. 11 and again beat the Condors at Citizens Business Bank Arena on Oct. 23 by a 5-4 score.