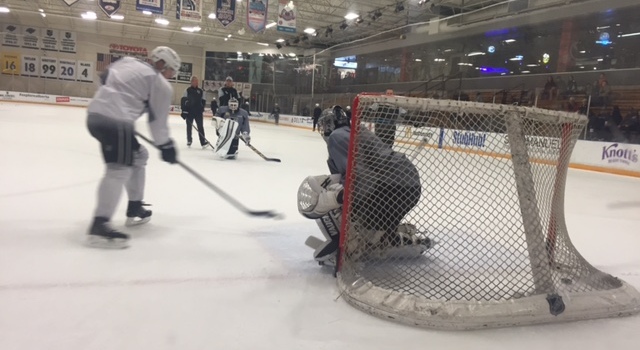 -Defensive pairings were the same as those used at the start of last night’s game: McNabb-Doughty, Muzzin-Martinez, Forbort-McBain and Ehrhoff-Greene.

-After some rushes and flow drills, the team took part in special teams work in which the penalty killers held their sticks by the blades, thus opening up the opportunity for additional lanes and crisp movement. The Kings’ power play is 9-for-26 over the last 10 games.

-The questions about Dwight King’s status on Twitter have increased on the last week, but the forward hasn’t resumed skating. He’s still in a walking boot. This Saturday will mark six weeks since he suffered a broken foot that required surgery; his original timeline was 8-10 weeks.

-I was taking part in a separate conversation while Jonathan Quick met with several reporters to discuss theoretical rule changes that could reduce the size of a goaltender’s equipment, or perhaps go as far as to make NHL nets larger. I only caught the tail end of the conversation, but I understand it was very interesting. Lisa and Rich will have the stories, but I did catch Quick speaking about his own equipment, saying, “Your chest protector, I think, is something that’s very important. You go out of your way to try to get pucks to hit you there because that’s where you can usually control your rebound the best, so you’re hoping that the majority of the pucks can hit you there, so you want to have the protection to accommodate for that. I think that’s one of the areas that could get cleaned and it’s probably the most difficult, just because there’s so many different body types, how many different measurements there are – like chest, arms, shoulders, waist – everything. It’s very difficult to get a standard measurement for every goalie in the league to get that. But I think that is somewhere that the league is looking to clean up. Also, it’s going to be a process. There are guys who will say that they need certain things for protection, and who’s to say that they’re wrong? Everyone kind of plays a little different. Everyone relies on gear a little bit differently, so it’s tough. Everybody plays it differently.”

Quick was also asked about the puck shot by Florida’s Brandon Pirri on Saturday that caught him in the mask. Not surprisingly, it didn’t feel like a nice, long foot massage.

“That dents the cage and it his you in the jaw, so it’s kind of like getting punched a little bit,” he said. “Usually if it doesn’t dent the cage and you don’t get it on skin, you feel it around the outside because of the way their helmets are built. … That one, that had some pop on it, so that [went] right to my jaw. That was one you feel a little more than usual. It comes with the territory.”

-Also tough: Milan Lucic, who wore a pair of shots down around his skates five minutes apart in practice. He was in pain while on the ice, but he skated through it and appeared to be no worse for the wear afterwards.

-I have a personal appointment this afternoon, so after the Darryl Sutter quotes go up next, posting will slow for several hours before resuming in the late afternoon. In the meantime, here’s my SiriusXM hit with Stellick and Simmer this morning: