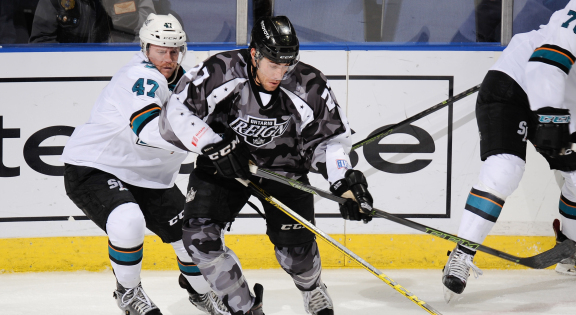 Head coach Mike Stothers, on the penalty kill:
That’s the game. It’s a close game and we kind of talked about it between the second and third going out there that we needed to step it up and have a little bit more of a killer instinct. Anything can happen. You get a penalty for too many men on the ice and as you’re killing the penalty you get a high stick and now you’re down two men. The guys did a great job. Started with the guys who won the faceoffs, blocked shots, we got the job done, but it’s a position we don’t want to put ourselves win. We dodged a huge bullet and we could have very easily gave away a point, a valuable point, or … nevermind. We’ve got to move on from that but it was another tough lesson for us young players.

Stothers, on the flow of the game:
I think it had some ebbs and flows. I thought there was some times where we were real dominant in their end and then I thought there was times that, you know, they spent far too much time in our zone. There was shift in the second period, we had a neutral zone turnover, and they spent a full minute in our zone. Like, a full minute. Which is excruciatingly long for a coach because usually what happens is you either get scored on or take a penalty. So again, we were kind of flirting with … things could go awry pretty quickly. But overall, I liked our game much better tonight than I did the other night in Stockton as far as our turnovers and our decisions. Our work ethic has never really left us, so I’m happy about that. Again, you can’t be too critical and you can’t be too hard on the guys. They’re working hard, they’re trying, they’re young, there’s mistakes that are gonna happen and if we weather them now perhaps we’ll be better later on in the season when we need to be.

Stothers, on Nic Dowd:
Dowder’s been unbelievable for us. He’s done everything we’ve asked. He’s a great faceoff guy, he makes plays, he’s responsible in our end. Power play, penalty kill. His game has come a long way. I think maybe the turning point for him was last year in the playoffs. He didn’t get maybe the praise or the accolades for his performance but the people who watched hockey, upper management in our organization watched him throughout the playoffs and were thrilled with the way he was playing and it hasn’t stopped. He’s just been full throttle. I know he had a good summer working and training and he wants to be an NHL regular. You know what, he’s opening some eyes and he’s making a statement.

Stothers, on Backman:
Backs is great. He’s a good leader for us. He’s one of the hardest working guys every day – whether it’s practice or games. And his energy rubs off on everybody. He’s a small guy that plays big, plays a big game. You know what, it took him a while to find the back of the net, I think the other night in Stockton was his first goal, but he was contributing with assists and setting players up. Again, there’s a guy who plays in all situations for us. He was part of our core group last year and a big part of why we had the success that we did and he’s carried it over this year. He’s been terrific.

Stothers, on Paul Bissonnette being out of lineup and how it affected lines:
It really did affect our lineup. We thought we had Biss and he injured himself in the morning skate and then we had to make some changes. We went with seven defenseman and that left a hole on the left side, of which Merschy did a majority of the work. We were able to move Kempe over and double-shift the centermen a few times to relieve the strain and the pressure that it was putting on big Mike. You know what, it’s an opportunity for Mike to get more ice time and he’s pretty darn good, so that was OK, but it’s not something you want to do on a regular basis because then you saw what happens if say a centerman like Crescenzi gets a penalty, it really messes things up. Sabourin, he’s in the box for 12 minutes, so we had to move Rainer up from defense to right wing so it does change things and maybe that’s why we took the too many men on the ice penalty. Blame the coach. It’s always the coach’s fault when it’s too many men on the ice. It was tough, but the guys did a good job and they got through it.

Stothers, on Backman’s progress:
I’ve seen a lot of good games from Backs. I know what to expect from him. I know what he’s gonna deliver every night and he very seldom disappoints.

Stothers, on MacDermid’s goal:
That was a heck of a shot. It’s not often, and it’s not that we drew it up that we have one defenseman taking the point shot and the other defenseman, his partner, is the actual net-front presence providing the screen. So it’s a good thing we scored on that one because it could have been a potential problem.

Sean Backman, on his goal:
That was a good stick by Augs there. He’s a big man getting in on the forecheck and forcing that turnover there. Kemps made a great play to me and I had a lot of time to put it where I want.

Backman, on getting goals in back-to-back games after not scoring early:
Especially a guy like me who’s expected to score a little bit. That first one is always the toughest and now that I’ve got it hopefully I can roll along here.

Backman, on taking more responsibility this season:
We didn’t know how our team was gonna shape up coming in. Obviously Jordan (Weal) made the big squad and then Onie (Brian O’Neill) gets a chance to play in the NHL with a different team, so, other guys like myself had to step up and I think we have a little bit.

Backman, on the way his game has progressed through the years:
I just think Stutts has a lot of confidence in what I can do and that’s what this game is all about, playing with confidence, and I think that’s what it is.

Backman, on the team’s reaction to the 5 on 3:
We’re pretty confident in our penalty kill, it’s been pretty good this year, but it’s kind of an “oh no” feeling whenever you go down 5 on 3, especially that late in the game but the guys did a heck of a job there at the end and killed it off.

Backman, on the chippiness:
That’s just the game of hockey. We’re gonna play these guys a lot, just like any other California team. I think we’re going to see a lot of those battles.

Kurtis MacDermid, on his goal:
I saw Vin going through there, I rolled up top and Horvie made a good pass to me. I just wanted to get through to the net and thankfully it found its way back to the net. I was pretty pumped, but more pumped up about getting the win. That comes first.

MacDermid, on his shot:
I’ve been working on a lot of it in practice with Hajter. It’s always an important part of the game, especially being a defenseman, getting pucks through. It’s just been paying off.